Everyone who has followed the gunny world, certainly knows about Jeff Cooper and the Scout rifle concept.  Cooper worked long an hard to nail down the definitive concept, but the base is simply a rifle with a long-eye--relief scope mounted forward of the receiver.  Cooper's rifle was a Steyr, but Ruger makes one, as does Savage.

Many people consider the Scout to be a niche rifle.  The first time you see it, it looks odd.  But, when people shoot it, they start to realize the practical aspect of a rifle that is fast to get into action.  My personal Scout is a Savage, not that the brand matters.  And, I have to admit that I bought it to see what all the hoopla was about.  After a couple of  years, and several trips to the range, I'm beginning to understand the concept.

Yet, I'm not as dogmatic as the much esteemed Col Cooper was, and I see the benefit of stretching the concept a bit.  Firehand, for example, has mounted a long-eye-relief scope on an AR upper and wants to play with it.  I think that's a great idea, and I hope that he takes time to give himself a chance to get over the "oddness" and explore the practicality of the concept.

Many of us are enamored with precision rifles.  Those rifles that have the ability to put steel on meat at extreme distances.  That's fine in itself, and I get it.  Really, I do.  Long range work is a joy to behold, and a science in itself.

A Scout rifle ain't like that.  It gives us the ability to hit a man-sized target out to 300 yards very quickly.  It's not fiddly, and there is no "doping".  Simply put the crosshair on the target and squeeze the trigger.  It's really simple, amazingly fast, and doesn't matter one whit if it's a modern AR or an old Spanish Mauser.  The concept is the same. 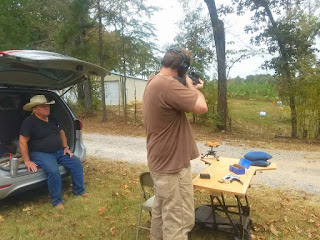 If you're looking for a fast, handy rifle, give the Scout concept a try.  An honest try.  I don't think you'll be disappointed.
Posted by Pawpaw at 12:00 PM

I think some years back(1960's) , Redfield even had a LER scope and scope mount for the Winchester 94 carbine (Redfield FrontIER). Worked really as the older 94s at the time had top eject operation. I see them for sale from time to time even now.

If I remember correctly, Cooper considered the Scout as a lightweight firearm for sneaking about the rurals. Not for protracted fire fights, just get the Sam Hill out of there after taking a shot or two.

I just think the scout rifle concept is an awesome all-around concept. Great for medium to large out to a few hundred yards, and great for people out to that distance, too, should the need arise.

1- In your opinion is the benefit of the log eye relief scope about that scope set up or about getting it out of the way of the receiver to reload?

2- Your son and I had a conversation about bolt guns during lunch some years ago in Alex. He had a big heavy bolt gun, you would call it a bean field rifle. Then inclusion I came to was that to cover all of his bases a guy needs at least 2 bolt rifles. You have the one with the bull barrel and a big heavy stock that can shoot from long away up on a hill for a long time. Then you have the light handy one for carrying around hunting and such. They could be the same brand and caliber like say Savage .308's but just built differently.

It's a niche rifle, IMHO. But it works for those close in shots, where you need quick acquisition, and the ability to snap shoot.

We've taken deer,hogs, and coyotes with our scouts out past 200 yards, (although ours are Savage sorta-scouts), and The #1 Minion has figured out how to use the "BDC" on her Burris 2-3/4X scout scope to get reliable hits out to 300+.

It's not a long-range gun, or an up-close-and-personal type brush gun, but it's the most practical rifle you will ever find. It doesn't shine at the bench (although ours do pretty damn well, usually giving sub-MOA groups from the bench) but from field positions, especially on a now-or-never shot, they really work well, and we're quite pleased with them.

Of course, ours aren't "for-real" scouts, since they don't make weight (the lightest one goes 7-14 with scope, sling and loaded mag) but they are under one meter in length, and there's nothing in North America that we can't tackle with them (although we'd like some heavy back-up for big bears!)

I think that if more people tried them from field positions, they'd find out just how useful they really are.

Oh, and I've scouterized a Marlin 336 in .30-30. Works better than expected, and I'm pretty sure that The Minion wielding it can do yeoman's work inside of 200 yards. I've seen her shoot, and she's pretty good with it!

I think I would prefer the Ruger, only because I can get it in a left hand model.

You can special order a Savage, it's about $100 above retail price for the right-handed version. Delivery takes about six months. It depends upon how bad you want it, I guess.

I ordered mine in a left-handed, 7mm-08. When the smoke cleared and the dust settled, I had it for about the same price as the MSRP for the right-handed version. Savage has a "custom shop" that will, if it can be built from available parts, they will build it. Talk to Ms. Effie Sullivan, she knows the parts and interchangeability better than anyone should, and she can usually quote you a price over the phone.

This was current as of three years ago.

I've got a Ruger with the Burris Scout Scope on it. I really like it! I see that Ruger is now making one with an 18.5" barrel in 6.5 Creedmore. I may have to pick one up.

just get the Sam Hill out of there after taking a shot or two.