Pot roast always a Sunday staple at both of my grandparents houses.  My maternal grandmother used a method that I never really nailed.  Her gravy had a corn starch thickener, and although I stood over her shoulder as she worked her magic, I never was able to duplicate her efforts.

But, my paternal grandfather, who lived two miles away, also cooked a pot roast as a Sunday staple.  One Saturday I asked him "PawPaw, teach me to make a pot roast."  He took the Sunday roast out of the fridge and he walked me through, step by step until it went into the oven.  It's really pretty simple.

It's been a year or so since I cooked one, and yesterday I went over to the local butcher shop and found a nice 8 lb roast.  This one is bottom round, but any will do.  Chuck, shoulder, rump, it really doesn't matter.  Basically, all we're doing is searing a piece of beef, then cooking it in gravy. 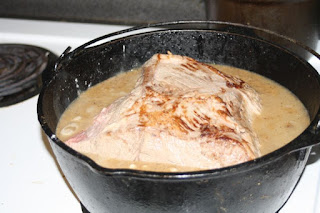 In a large Dutch Oven, heat a little oil, enough to cover the bottom.  Sear your roast on all sides to a medium brown.  Remove from oil.

Make a roux with your flour and the oil in the bottom of the pot.   If you don't know how to make a roux, click on the link.  When the roux is the proper color (I like mine a medium brown, but some like it darker), add water to make a gravy.  Salt and pepper to taste.

Put the seared roast into the gravy, preheat the oven to 350 Peel the onion and drop it whole into the pot.  Likewise that stalk of celery.  Put the lid on the dutch oven and slide the whole thing into that hot oven.  Let it cook at 350 for four hours.

Put a bunch of whole (peeled) potatoes in there along with a bunch of carrots cut to about an inch.