People are reporting and the government is silent about what sounded like a large explosion in the skies over Montana late yesterday.

Did they shoot it down?

Evidently, there was a balloon drifting over Montana.  A Chinese balloon.  Whut?

WASHINGTON – A Chinese spy balloon has been spotted drifting over the northern United States, and Pentagon officials have considered shooting it down, Defense Department officials said late Thursday.

Okay, so why not just shoot it down?

The decision not to shoot down the balloon was made because of concerns that debris could injure Americans on the ground or destroy property, according to a senior Defense Department official who briefed reporters on condition of anonymity

Belle and I went to Quinton's deployment ceremony this morning at Camp Beauregard this morning.  His outfit, the 3673d Support Maintenance Company is headed to Fort Hood for February and heading downrange early in March..

This will be our last opportunity to see him before he goes wheels-up.  His grandma wanted one last hug before he left. 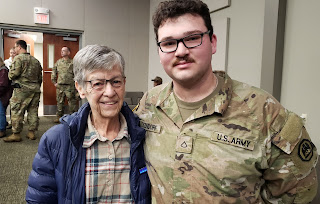 Godspeed 3673d.  Watch after our troops.

This morning, as is tradition, Puxatawney Phil emerged from his burrow on Gobblers Kob to predict the weather.  He saw his shadow, and we're in for another six weeks of winter.

He wouldn't have seen his shadow in my front yard.  Three days of miserable, misting, cold weather have everyone in a grand funk.  Belle  and I have to get out today, to attend a military ceremony.  Grandson Quinton's unit is taking the first step on a deployment.  They are leaving Camp Beauregard to meet the main body at Jackson Barracks in New Orleans, thence to Fort Hood for pre-deployment training. Eventually, heading to Kuwait.

I am more concerned about him being at Fort Hood during February than I am about him going to Kuwait.  Fort Hood can be miserable this time of year.  Still, he is off on a grand adventure and I wish I were going with them.

On this first day of February, I got out early as I normally do on the 1st.  I took a non-driving buddy to do his banking and some shopping.  The weather is miserable, rainy, drizzly, with temps in the 30s.  According to the weather-weenies, it will remain so all day long.  Thankfully, no ice in the forecast and this morning the roads were wet, but passable.

Watching weather videos, I feel sorry for my friends in central Texas.  I hope y'all stay warm and safe.  Likewise my buddies in Arkansas.

While running errands this morning, my friend wanted to stop by the smoke shop. While there I noticed a bottle of whiskey I have been wanting to try.  Redbreast 12. 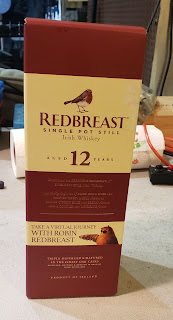 It is what they call a Single Pot Still Irish whiskey, and I understand that it is delicious.  That will have to wait until the weather moderates and I am able to give it a fair assessment.  This morning, I'm sipping hot cocoa and pondering lunch.

Is The US Food Industry Under Attack?

There is an old saying, "The first is bad luck, the second is coincidence, the third is enemy action."

There have been a lot of US food infrastructure going off-line over the past year.  Some of us are starting to wonder why.

Rumble video here.  I can't get it to embed.

Let's not forget that Joe Biden promised us food shortages.

It's miserable outside by central Louisiana standards.  Several days of rain have left the ground soggy, mud prevails.  Right now it is misting rain with temps in the high 30s.  We're not under any threat of ice or snow, but it is miserable outside.  I have run my errands and will stay hunkered down for the rest of the day,  trying to keep dry and warm.

Looking north a hundred miles, those folks are under the threat of ice.  Bless their hearts.  I hope everyone stays safe out there.

It's days like this when I believe that God is saying "Take a break."  I intend to do so.

I'm sure that you have all heard, by now, about the death of Tyre Nichols in Memphis.  Five officers are indicted in his death.  Details are still unclear, but it appears that Nichols was stopped for reckless driving.  At some point a foot chase developed, and when Nichols was apprehended, he was beaten by the officers.  Nichols later died.

Nichols was black, the Chief of the Memphis PD is black, and the five officers indicted are all black. This inconvenient fact has not stopped some from claiming that "white supremacy" played a role in this tragedy.  That is patently ridiculous, as most of these claims are.  "White Supremacy" has become the great bugaboo of this century, used to explain everything from failing schools to covid deaths.

I admit that racism has, in the past, played a part in the culture of the United States. That is history.  But, lately, "white supremacy" has become a convenient argument to explain the inexplicable.  Like the monster under the bed, when you shine a light on it, it seems to disappear. It's there in the dark recesses of your mind, but it cannot explain the present.

The truth is deeper than that.  And more complex.  Five black officers with bodycams beat a suspect. That suspect later died of his injuries.  That is what happened.  We can debate why it happened, but sometimes it is impossible to explain the inexplicable.  We can talk about police culture, and we can talk about the recent history of the defund movement and what that means in the broader sociological sphere, but we may not be able to explain why it happened.

Grandson Lucas gets off the school bus at our house every day, due to the schedules and routes of the school bus.  His dad meets him here, and we generally chat for a bit before he goes home.  You never know what question he is going to ask.  Lucas is 12 years old.

Lucas is a shooter in his school's rimfire team.  His dad built him a Ruger 10/22 and from all reports, he is doing well with it.  Today he wanted to know about bullet speed and RPM and barrel twist rates, so we went down that rabbit hole.

It still amazes me, and I know the match, about how fast a bullet spins when it comes out of the tube.  The basic equation is here.  He's a budding gear-head, so we had to relate that to engine rpm.  He is amazed that a CCI mini-mag spins at lot faster than a small block Chevy.

Passing on the information.  That's my job as a grandfather.  I wonder what he is going to ask me about tomorrow?

They do get stuck, occasionally.  We're in the wet season now, and we'll have to be carful where we take the tractor.  It's out now, and grandson Lucas is learning basic vehicle recovery. 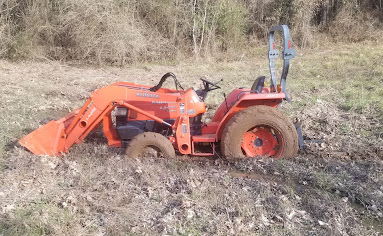 I don't know how he sees with all that hair in his face. 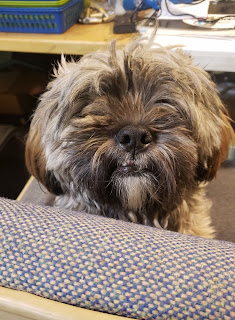