Back in 1957, Townsend Whelen said, "Only accurate rifles re interesting."

I believe that to be true, and I believe that we live in a golden age of rifle manufacturing.   The rifles we buy off the shelf today are much more accurate than the rifles we could buy only  20 years ago, much less when compared to the rifles available when Mr. Whelen was shooting.  When I started shooting rifles back in the '70s, about all we could expect were 3" or 4" groups at 100 ards.  If a shooter were chasing the grail of the 1" rifle, it took gunsmithing ability.  You'd take the metal out of the stock, hog out the wood and bed the rifle in fiberglass, float the barrel, and adjust or hone the trigger and hope that when you put the rifle back together, you had not done more harm than good.

Likewise the glass.  Scopes in those days were eminently unreliable.  Erectors would break, crosshairs would shift, and recoil of the rifle would shake scopes apart.  It was not at all uncommon to take your lovingly tuned rifle out to the woods on a cold morning to find that the nitrogen had leaked out and the entire inside of the scope had fogged between taking it out of the warm truck and the cold deer stand, making both rifle and scope absolutely useless.

Nowadays, it is absolutely simple to buy a rifle off the shelf, put some inexpensive glass on it, take it to the range and be fairly confident that the rifle will shoot into almost an inch at 100 yards, and that the glass will stand up to the rigors of normal hunting and shooting.   These rifles may not have the beauty and soul of a pre-64 Winchester, or a custom Remington, but by God, they'll shoot.  Regular readers will know that I'm a fan of Savage and Ruger rifles, and will know that I've lovingly tuned several Savage 110's and Ruger 77s to be accurate, reliable, hunting rifles.  It is still possible to do those things, but nowadays if you want a rifle that is simply ready to shoot, go no further than two of my favorites, the Savage Axis and the Ruger American.

A couple of weeks ago I picked up a Ruger American Compact in .308 Winchester.  It has a plastic stock and a bedding block and the cost, out the door was well under $500.00.  Everything I had read about the rifle told me that it was a great little rifle.  My daughter wanted to deer hunt with her husband, and she didn't have a rifle.  She wanted to borrow one of mine,   The little Ruger was on sale, and if she borrowed one of mine, I'd need another.   The next day I found a sale on Leupold VX-1 scopes.  Anytime you can buy a Leopold for under $200 it's a deal, so I picked that up and mounted it on the rifle.  I didn't get a chance to shoot the rifle until yesterday, when my daughter and ounger son went out to their brother's place where he has set up a 100 yard range.


I brought two rifles to shoot.  The Ruger American and my Savage Scout.  I wanted daughter to try them both.  She's a neophyte to rifle shooting and I wanted to give her the experience of both styles.  We quickly bore-sighted the Ruger by the expedient of locking it in a cleaning jig, removing the bolt and looking through the bore toward a 9" gong at 100 yards.    Adjusted the scope to the gong without moving the rifle, then we moved over to the shooting bench.

Three shots later, the little Ruger was on paper, hitting a one-inch dot at 25 yards.

"Okay, " I told my son, "Reach out and hit that six-inch gong at 100 yards.".  He squeezed the trigger and we hard the bullet splash, a satisfying whack.  With the rifle sighted, it was time to have a little fun.  We took turns shooting the rifle, making the gongs dance downrange.  Then we took out the Scout rifle and played with it for a while.

After we had gone through over half the available ammo, I asked her which one she liked.

"The American," she replied.  "But I don't want to take your new rifle."

"Why do you think I bought it?", I asked her.  "I've given rifles to all your brothers,.  Now, it's your turn."  In truth, I have my rifles.  I don't need any more, but the chance to shoot something new is always an urge I have trouble passing up.

But, the point of this vignette is that I didn't have to spend a lot of time and effort getting this rifle to the point where I feel confident giving it to her.  Right out of the box, it shoots just fine, and I have no doubt that with an experienced shooter and a still day, it would put bullets in that magical 1" group.  My daughter is a neophyte to rifle shooting, but she has a rifle that should serve her well for many decades, one that she can pass down when it's her turn to stay in the camp.    But, in the intervening decades, I hope that she takes a lot of venison with it, and remembers the day that she first whacked a 6" gong across her brother's range. 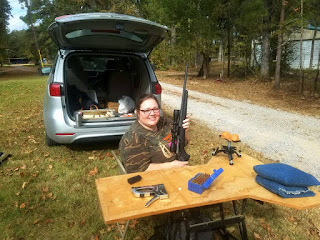 And, shooting with family on a backyard range is probably the very best way to spend a Saturday morning.

Author's note. - For the record, my favorite load for the .308 Winchester is one that we stumbled onto a decade or so, ago.  Good brass with a Winchester or CCI large rifle primer.  43.0 grains of Reloder 15 powder and a good 150 or 168 grain bullet.  Depending on your barrel, the 150 will fly at better than 2800 and the 165/168 will run out at about 2650.    With benchrest preparation, it will keep them almost in the same hold.  With normal components, it will stay inside an inch, if the nut behind the stock knows his business.  I have a lot of confidence in this load.
Posted by Pawpaw at 7:47 AM

2 hours vs. 3 or more months is a blessing! And while the 'craftsmanship' may not be there, the accuracy is! Good on ya!

I had a hell of a lot of fun Saturday, pop. It's been too long since we had a family day shooting rifles!

"... the chance to shoot something new is always an urge I have trouble passing up."
Change "shoot" to "ride", & you've described me & motorcycles; I picked up another last week, making 6 in all. It was a deal I couldn't resist.
It's okay, I still have 3 times as many firearms as bikes. I love my weapons, but bikes are my real weakness.
--Tennessee Budd