Three of us met this morning in the backyard.  It's a whole heckuva lot easier to set up and tear down the range here than it is somewhere else, and everyone else is off squirrel hunting anyway.  I needed some practice, so we set up the range. 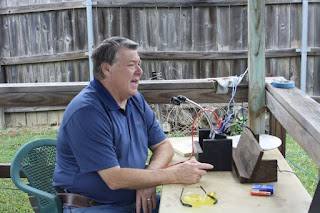 When you have a small group, you get to do some teaching.  I started teaching Big Bill how to work the equipment and call the line. 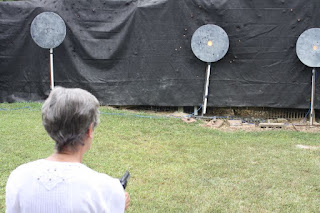 We shot for a while at 21 feet, Here's Belle, getting her gunfighter on.  We worked that for an hour or so, then I decided to do something I'd read about earlier.

When you're trying to push your speed, there is a lot to think about, and gunfighting isn't a thinking sport.  You've got to be fast and accurate, and generally, you trade off one to get the other.  If you go fast, you're less accurate, if you're accurate, you're not quite as fast.

So, if you drop the target down to holster level, and you go as fast as you possibly can, you start to see things in your draw that you haven' seen before, and after ten or twelve shots, a group starts to emerge.  That's your "sweet spot", where you're going as fast as you can, and putting the bullet on the plate.  As your group emerges on the plate, it's just a matter of finding out how to translate that, with foot position, to the 21 foot range we use at competitions.  It's an interesting exercise. 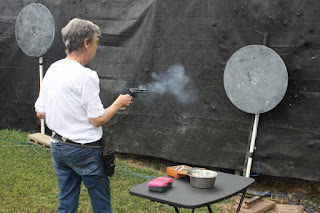 We all shot at six feet, and here is Belle, taking her turn at target.  She's starting to get a group to emerge, nicely centered around the light, and just a bit left of center.    Also, she was hitting the plate with times in the 6s, which is fully a tenth of a second faster than her best time at 21 feet.

We also learned (all three of us) that it is entirely possible to miss a 24 inch plate at 6 feet.  That's sobering.

But, we had a great time, shot some ammo, learned some things, and now it's time to clean guns and reload ammo.
Posted by Pawpaw at 3:04 PM

Wasn't it Wyatt Earp who said "You can't miss fast enough to win a gunfight."?

That said, looks like ya'll are havin' fun, and that's the main thing!

What do you figure was the problem that caused y'all to miss the plate?