Squirrel season opened in Louisiana this morning, and lots of hunters are i the woods, especially in central and northern Louisiana.  It's a rite of passage in this area, and lots of folks are chasing squirrels in every available patch of woods.  Others are taking the opportunity to scout for deer.  Bow season is open and the gun season opens later this month.

But, out in the Gulf, we've got a problem.  A hurricane named Nate.  With maximum sustained winds of 85 mph, it's not an especially strong storm, but it has the potential to bring damaging winds and rain to southeast Louisiana and southern Mississippi. 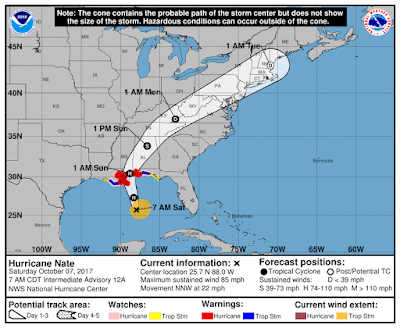 Rainfall from this thing will affect the Mississippi River valley, across Mississippi, Alabama, Northern Georgia, well, you can see the map.

For PawPaw, Nate is not going to have much impact.  I'll be doing the usual Saturday stuff,   We're shooting in the backyard this morning, then after lunch, traveling to a friend's place to look at a range her recently built.  We'll be back home before 5:00 because I'm supposed to meet a contracor who wants to bid on a concrete slab I'll be pouring soon.
Posted by Pawpaw at 8:22 AM