I've been loading shotshells for decades.  I started in the '70s when I was shooting competition skeet, and continued as I raised four children, all of whom shoot shotguns.  I started buying primes by the brick of 1000, then graduated to the brick of 5000, but each time, the primers were packed in little sleeves of 100.

This weekend, I saw something new.  We shoot a lot of shotgun primers in our sport, and with the recent shortages, the availability of primers has become acute.  I buy primers in bulk to support the club, and recently the supplies have dried up.

One of the shooters this weekend mentioned that he had some primers for sale.  And, he wasn't scalping.  I think that I got a good deal, considering the times, for a brick of 10,000.  We made the deal, shook hands, and I took possession.  These are Nobel Sport primers, made in Italy, and one of the favorites of our sport.  I thought a brick of 10,000 was a bit odd, but beggars can't be choosers.

Today when I got home I decided to open them to look.

The front of the box.  Nobel Sport, pretty standard

So, I took our my pocket knife and cut the tape.  What a surprise. 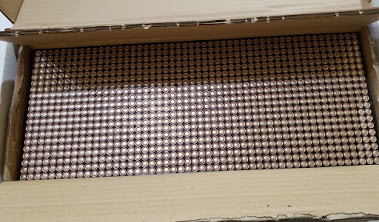 Yeah... that's a sleeve of 1000 primers.  I have bought a lot of primers in my day, from a lot of places, but I've never seen anything like that.  All I can figure is that this is the way Nobel packages them for other manufacturers.  But, no worries.  I have them now, and I'll save them for a big shoot.  Still, I thought you guys might have some insight.  Isn't that odd?