A buddy brought over an interesting revolver, because he knows I like such things.  Reportedly, his great-uncle brought it back from World War 1.  It's a double-actin revolver in some obscure 10.5 mm cartridge. 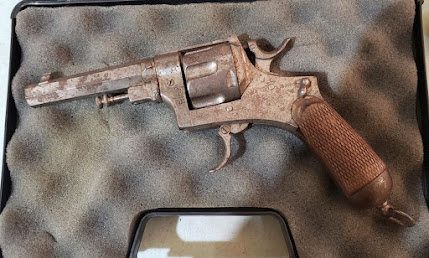 The frame is marked 1913, and there is a proof mark that I don't recognize. The butt is round, and has a lanyard loop.  No trigger guard.  A note in the case says that it was made in the Eibar region in Spain. 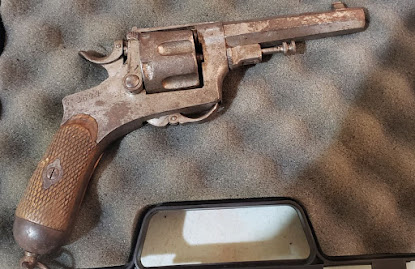 The trigger folds, like a Patterson revolver. The loading gate swings down, to the rear.
It's a weird revolver, about the size of an N-frame Smith.  It holds six shots, and I admit that I have exhausted my knowledge about it.
Posted by Pawpaw at 7:34 PM

That is an odd one, to put it mildly.

That has a lot in common with the Nagant revolvers of similar vintage.

Pretty sure that’s a Bodeo; Spanish issue revolver from the late 1800’s through the 1930’s. Buddy of mine used to have a box full of them, apparently “quality of manufacturing “ varied quite a bit... his kids used them like cap guns. (Different time...)

Yep, what Daddy Hawk said above. The Roosians must have liked something about it and piddlefarted with design quirks fitting their needs.