Feeling peckish about 2:00 pm, I told the boys that I was going to crank up the griddle.  I had some ground meat I needed to use, so we went out, lit the griddle, then started on the ground meat.  We added some eggs, salt and pepper, then a bag of bacon bits that we found in the cupboard.  Formed the whole mess into three, third-pound patties, and cut up an onion to saute. 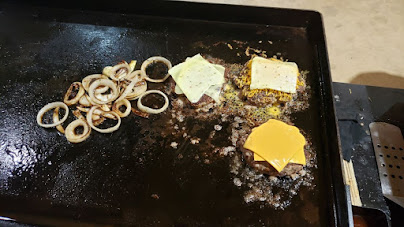 I told the boys to claim a patty, so that we could individualize them.  I went with cheddar slices, while one teen went with pepperjack, and the other mixed shredded cheddar with pepperjack.

We had no buns, so had to make-do with a box of Texas toast I found in the freezer. 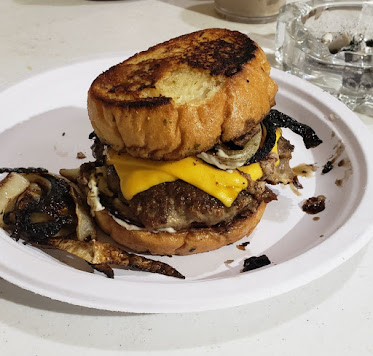 They were a bit ungainly, so we wound up eating them with knife and fork.  Still, that was a fine burger.