I was reading an article about the declining population of New York City, and decided to do a little clicking and see how bad the our-migration of Louisiana might be.  It's a sad decline.

Louisiana's population last saw an increase in 2016, the first year o the term of John Bel Edwards.   It takes a while for policy choices to turn into trends, and our decline started in 2016.  Since the, according to these numbers, our state has lost 21,766 people.

In a report by LSU, it gives a more in-depth look at population changes 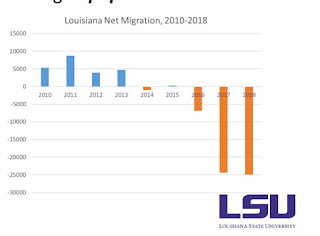 It's one thing to look at trends on a macro level, it's another thing entirely to look at them on a micro level.  In the case of my family, Louisiana lost two highly credentialed families in 2019.  That summer they were both head-hunted by outfits in other states.  The total package was too good, so they packed up and left.  PawPaw's family in Louisiana decreased by 50%.

This is our Governor's business legacy.  His long-term legacy might be that we lose a US Representative after the Census is tabulated this year.  His Covid legacy is one of lockdown and restrictions.  He can still turn it around, but in large part the damage is done.He would have to become extremely business-friendly and expremely freedom oriented.  I have no expectation of either.

Email ThisBlogThis!Share to TwitterShare to FacebookShare to Pinterest
Labels: Louisiana

Yeah, I'm starting to see a lot more out of state licenses in the parking lot of the local HEB (A grocery store chain). I'm not too worried about the ones from Louisiana, but the New York/California ones ? Assuming they learned something during their exodus, then welcome. If not...

And the 'payoff' is long term loss of capability...

Economists often refer to the multiplier effect. While they generally are talking about how businesses operate, a community functions in a similar fashion. Outward migration decreases the money that goes from one hand to another among the population.

Agree with juvat, an increased population from 'Cloud People' states are not welcome. Smart enough to flee their self voted crap hole state, now come to new locale to vote stupid and make it like their old home. I weep for my kids future - not the same country I grew up in.