Back in November, I ordered some pulled bullets from Rocky Mountain Reloading.  They were billed as Federal Fusion, pulled bullets and when I got my order, I blogged it.  I loaded some ammo with them and was less than impressed with my shooting, or the targets.

However, I always load more ammo than I need for a range session, and I had a few of those loads left.  That 150 Fusion over 49 grains of IMR 4895 should be a good load, hovering around 2800 fps, but for some reason that day, I couldn't get them to group from my Savage .30-06.  Groups averaged around 1.5 inches, which is okay, but not what I expect from that rifle and good ammunition.

Yesterday I was mowing at Momma's house and when I got off the tractor I took out my Savage to send three toward the steel targets near the berm.  That Fusion bullet rang the gong with authority and because it's a nine-inch circle, I didn't think much of it.  Of course I can hit a 9" gong at 100 yards.  I dropped the gong into the truck so that I could do some work on it prior to adding it to the new gong rack.

This morning I carried it to the bench, then looked at it more closely.  Those three shots made a tight little cluster about an inch above my aiming point, so I took out the calipers. 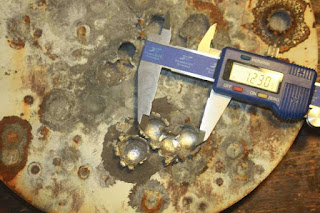 Those three shots all fell into 1.230 inches.  Subtract the width of a .308 bullet and that's just under an inch.  Those shots weren't fired from the bench, I was leaning across the hood of the pickup truck and sighting toward a gong in shadow just a little over 100 yards away.  Not bad at all.

I don't know what I was worried about.  That's fine hunting accuracy, and I think I've found my hunting load for this season.  Now, to load a few more and start getting ready.  November will be here before you knowit.
Posted by Pawpaw at 9:18 AM