When I started working on the gong target I knew that I had two different steel types to work with.  Some locally produced 13/16th mild steel plate and some AR500 steel gongs made by Quality Targets.  This morning was the first chance I've gotten to hang them side-by-side and the difference in the two is interesting.  First, the commercial target is a lot lighter, mainly because it's made of thinner steel.  They both "whack" satisfactorily, but the thinner targets seem to be tougher on the strapping I used to hang them.  Maybe something about the transfer of momentum when the bullet smacks the gong, but the heavier mild-steel target seemed to be easier on the hanging straps.  Both of these are 9" diameter gongs.

Still, the difference is easily seen.  First the mild-steel target, shot with a variety of deer-rifle calibers at about 150 yards. 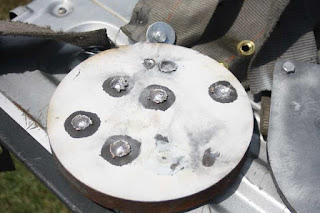 As you can see, and you can click on it for a bigger version, the deer-rifle calibers cratered the steel fairly severely.  So, next we'll consider the hard-steel commercial targets. 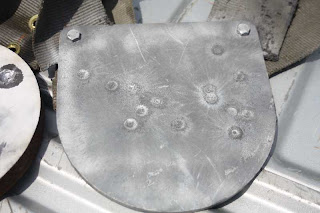 No cratering at all.  Yeah, you can see where the bullets hit the plate, but it left tiny, smooth-faced dimples.  I'd say that the damage sustained was far less against the hard-steel plate.  Interesting, both gongs where painted the same color last week.  The impact from the bullets whacked nearly all the paint from the hard-steel target.

Another interesting tidbit is that at the end of the day, the bolts holding the steel to the strapping were loose, way loose.  What loosened those bolts?  Maybe the shock of the impact?  Heck, I don't know.  They're tight again, farmer-tight.
Posted by Pawpaw at 2:56 PM

THAT is why I only have AR-500 steels... And the impact is what loosens the bolts, just like an impact driver! :-)

On our hangers down at my range we have them with chain. That seems to help with them not getting as banged up. But we also have them close to the ground and with a full steel surround to help with stray rounds.

Have you tried lock washers?