I started getting ready for deer season this afternoon.  It opens in a little over a scant four months and I've barely enough time to get ready, so I decided to cast some .45-70 bullets this afternoon. 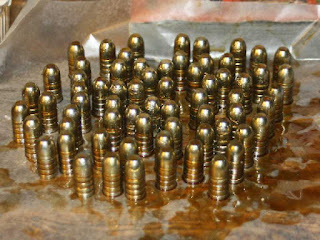 Those are Lee's .457-405F, a flat point 405 grain bullet and they're cast from dead soft lead.  They've had one trip through the liquid alox, courtesy of the good folks at White Label Lube Co.  These folks sell lube in 32 ox bottles and I've ordered from them, I have about a half-gallon of their stuff under the bench.  It's a whole lot less expensive than that brand-name lube and smells like the same stuff.

Those bullets will be loaded with smokeless and pushed to just barely over black powder velocity.  I don't load my .45-70 very hot, because I've never been convinced that the recoil is worth the added momentum.  Pushing that big ole 405 grain bullet at 1300 fps is plenty fast for the smallish whitetail deer we've got in these parts.

Deer season will be upon us before you know it.  Get ready.
Posted by Pawpaw at 7:39 PM

Reminds me, I need to go zero scopes... Good looking rounds though!

I have a .45-70 Guide Gun, dies,
bullets, cases, powder and primers.
But haven't loaded a round yet.

We need to work up a trade. Some of your 45-70 loads for some fresh Houma shrimp, or steaks froms steers raised on Rancho del Termite.......

Here in WA State, any centerfire arm of .243" bore diameter and having a 4" barrel measured from the breech face is legal for deer, black bear and cougar. So my M1 Carbine has become my deer rifle. I use 130 grain rn bullets cast of wheelweight alloy in a now discontinued Lee mold loaded to about 1900 fps. The last two deer I took didn't know they'd been killed with anything lighter than a 30-30, after all dead's dead. Hit a 120 lb. Coast Blacktail just aft of the top leg joint and he meets his ancestors. Almost no recoil and little noise. An M1 Carbine with a 5 rd magazine is one handy little rifle.