Flyers are the bane of every serious rifle shooter.  As soon as you think you've got a great group going, one shot strays outside the box and lands somewhere in the next county.  Case in point:  I took my Ruger 77 to the range today.  It's an older rifle, built in 1973, in .25-06.  I bought it early this year from a local pawn shop.  The rifle has potential, with what seems to be an affinity for the 117 grain Hornady Interlock bullet.  I put a fouling shot through it then settled in at the bench. 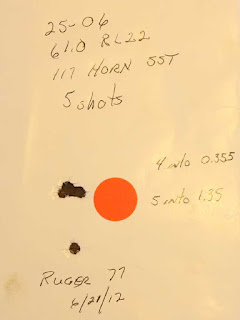 That's a five shot group.  The first two went into a bughole, the third shot went down into the doldrums, and the next two simply widened the bughole.  Four shots into an incredible 0.335 inches and that flyer opened the group to 1.35 inches.  Gaah! 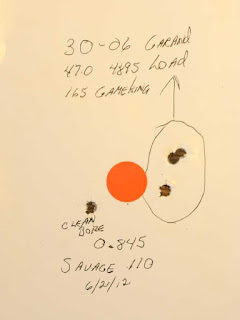 That's the clean-bore shot on the left, then three for meat shots.  Two touching and that third shot down below.  The rifle still put those three in under an inch, but I would have been really pleased if all three were touching.  That's not my karma today, so I packed up and came home.

I might have been flinching.,  Before I started with the scoped rifles, I tried out a new load in the Handi-rifle.  I went to the Hodgdon website and looked up cast bullet loads, found a load for the .45-70 of 45.6 grains of IMR 4895. I used a 405 grain, soft lead bullet.  It's listed as a starting load, suitable for trapdoor rifles, but when I touched the first one off, just damn!  Four more and I was finished with that rifle, much preferring to shoot the .30-06.  The Hogdgon website says that the load should be running about 1500 fps, and that may be wo, but it was throwing pieces of berm 15 feet into the air.  That may be a starting load, but shot from that lightweight Handi-rifle, it was quite a handful.  I'll need to make an appointment at the dentist, simply to see if my fillings were jarred loose in the recoil.
Posted by Pawpaw at 1:20 PM