I'm an inveterate scrounger, always looking for something that I need for free, rather than for money.  A while back I was looking for lexan poly carbonate, and I asked a friend who happens to own a glass shop what he had laying around.

Well, he didn't, but he told me that he'd keep his eye open, and a couple of months later he called me back.  He had been changing the poly windows in a big piece of John Deere machinery, the poly on the cab, and he asked if I wanted the old windows.

Well, yeah, so I drove over to see.  Great googly moogly, three big pieces of poly, heavy stuff.  I took them gratefully and put them in the truck, to cut up later for target glass like we use inn Cowboy Fast Draw.  Whereas the specs call for 3/8 poly, this stuff mic's out at 0.475, almost a half inch.  That should be sufficient for my purposes.  Today, I got out a good carbide blade and tried curring it on the table saw.  Easy-peassy, and in just a few minutes I had a dozen pieces of target lexan. 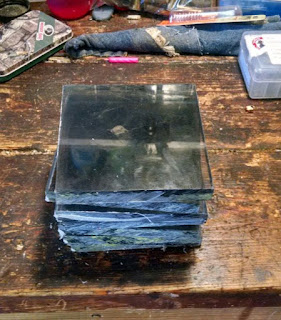 The picture doesn't show it, but this stuff is tinted John Deere green.  That shouldn't affect the light transmission to any degree that we'll be able to see.  All told, I made about a dozen, and I have plenty of lexan fo several dozen more.

Some say it is being cheap, I say it is being efficient. While sometimes it is easy peasey, I love the challenge of reusing - called 'repurposing' nowadays - a tool or device or raw material for a new idea. I say you have a great thing here.