It seems that an aviator flying over Rapides Parish was forced to make an unplanned stop before getting to wherever he was heading.  From the Rapides SO Faceboook page.

At approximately 4:02 pm, Sheriffs dispatch received a report of a private, single engine  aircraft declaring an emergency  and landing in a field off of LA 121.

Deputies responded to the area and located the aircraft in the 5600 block of LA 121. No injuries were reported. 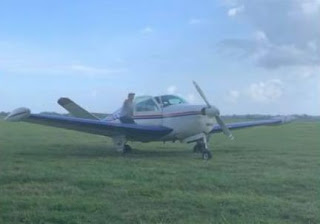 No injuries, that's good, and the aircraft appears to be intact and on it's landing gar.  That's good.  And, the field looks big enough that when the "aw-shit: is all over,  they might be able to fly it out of there.

Email ThisBlogThis!Share to TwitterShare to FacebookShare to Pinterest
Labels: aviation

Yep. Right near Ken's place.
For those unfamiliar, Ken has a private strip near there.