The UK Defense Journal is reporting that American B52 bombers are heading to Afghanistan to bomb a large base in that country to keep attack aircraft our of the hands of the Taliban.

The Taliban have made huge gains over the past several days, mainly because the Afghan Army units are evaporating.  They see the handwriting on the wall and don't want to engage.  I've seen reports of Taliban fighters near Kabul, and all indications are that the city will fall quickly.  The pace of operations seems to have caught the Biden administration off guard and they are hard-pressed to keep up with the pace of the implosion.

On this Sunday morning, I will pray for our troops on the ground, assisting with the evacuations that are clearly in progress.

UPDATE** Just two hours after the post above, we learn that things are going even less well, and at a higher tempo than previously reported.  Things are getting bad. 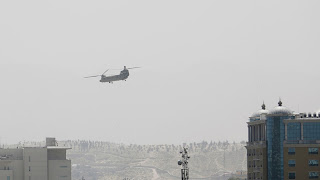 Saigon Part II, what a sad state of affairs.