My old Model 38, the Smith and Wesson Airweight is back in service.  I found this gun in late 2011 or early 2012, a pawn shop find.  Originally a nickeled aluminum revolver, I bought it very used and it became a pocket gun.  I've always been enamored of J-frame pistols.  A blast from the past.

Here is the old girl as she came from the pawn shop, wearing Herrett grips. 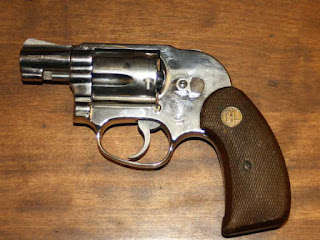 A couple of years ago during routine service, we found some problems with the nickel finish.  It was starting to peel.  My Smith mechanic recommended that we refinish the frame, and I put it on the back burner to fighure out what I wanted to do.

After a couple of years, grandson Zach is now a cerracote gguy at a local AR manufactory.  He took the frame in and stripped it, then coated it with what he calls Armorers Black.  My Smith mechanic was in town today and he reassembled the gun.  I wanted to keep the cylinder and crane nickeledd, with a black frame, to make it a bi-color. 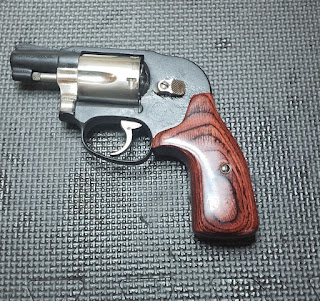 It's back together now, with a new set of cocobolo grips.  This revolver has a pinned barrel, so I know that its date of manufacture pre-dates 1982.  In 1982, SW dropped the pinned barrel as an unnecessary production step.  The revolver is at least 40 years old, and is ready for another 40 years of service.

I'm sure you're glad to have in back in your 'pocket' so to speak.

Cool old gun. I feel funny hearing '82 is a long time ago - I graduated high school a year prior to that ! 8^)

Those grips should slip inside your pocket easier than those Herretts - I hope that is the case.

I had a nickel Model 38 that predated 1982; I know that because I bought it in 1977. I carried it in an IWB holster at 4:00 or 5:00; before very long the nickel on the left side of the hammer housing (the side next to me) wore down enough to expose the copper underneath. Smith had several QC problems at that time, and I thin that was one of them. I no longer have the gun; I sold it in 1982. But it shot well, even if it wasn't very pretty.