It appears that a tropical system in the Gulf we have been watching has now become Tropical Storm Nicholas, the fourteenth named storm this year.  It may or may not become a hurricane, but all indications are that it is going to be a rain-maker.  Some models show as much as 25 inches in some unlucky localities.. 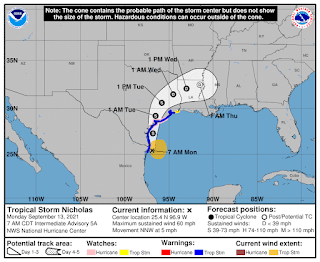 It looks like it is mainly going to affect south Texas, but it is supposed to slide into Louisiana as a depression later this week.  We're mainly on the "wet" side of the storm, so we are going to get rain for a couple of days before it dissipates.