On the border, down near Del Rio, TX, we're seeing an influx of Haitian folks trying to get into the US.  Over 10,0000 the last I heard.  Most of them camped under the International Bridge.  Governor Abbot has sent a bunch of DPS folks down there to try and stem the flow.

There is liberal outage, I understand, because the Texans brought horses.  Imagine that!  Texas law enforcement on horses.  The photo below is causing especial angst because... I don't know hy. 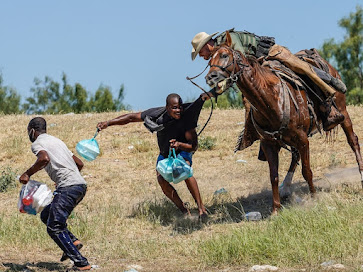 That trooper ain't whipping anyone.  With his left hand, he is controlling the horse, with his right hand, He is grabbing the miscreant by the shirt-sleeve.  That rope-looking thing between them seems to be loose.  It doesn't appear to the rains. 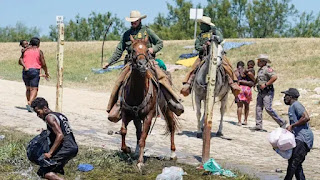 Here we have what appears o be a tranquil border scene, where a bored trooper is twirling the end of a rope,  probably to straighten it prior to coiling.  I've seen cowboys do this thousands of times.  There is nothing threatening about it.  Just two stalwart cops, doing a days work.
If Kamala would like to complain, maybe she needs to get her malfeasant as down to Del Rio and do something productive.  Oh, wait,... I forgot.  She ain't never been productive.
Posted by Pawpaw at 3:06 PM

If the gubmint won't do the job it will be left up to " We THe People " and they won't like it when we jump in .

Nice comment from people that have never ridden a horse or no the gear,stupid city folk