The M219 machine gun is a (sort-of) blast from the past.  I say (sort of) because I remember it as a gun that never really ran.

The M219 was a derivation of the M73 machine gun.  It was a n air-cooled, recoil operated machine gun that fired the linked 7.62 NATO cartridge.  It was designed to be coaxially mounted in armored vehicles, including the M60 series tanks, the M551 Sheridan ACAV, and the Engineers M728 CEV. 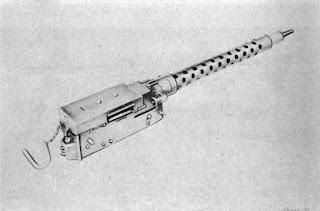 Oh, what a turd this little gun was.  A coaxially mounted mounted machine gun is mounted beside the main gun of an armored vehicle, and is linked mechanically to the main gun so that it points along the same axis as the main gun.  The tank gunner controls the coax from his position in the vehicle.

I got out of tanks in 1977, assigned to push troops in the 4th Brigade at Knox.  Thence to a variety of staff positions.  When I got back to Knox in the mid 80s for the Advanced Course, the Army had scrapped the 219 in favor of FNs new M240 machine gun.  The M240 was a delightful little weapon that could be mounted as a coax, or dismounted and used in other roles.

The M240 is still in use today, and by all accounts is a fine machine gun.  I thought it was a huge improvement on the M219, if for no other reason that it fired when the gunner asked it to fire.

It's really the last of the Industrial Age machinegun designs, with the receiver made of plates riveted together - just like the M1917, M1919, and M2 designs by John Moses Browning.

But it does run. When the coax M240C on my Bradley jammed, it was invariably because of an ammo belt/feed issue somewehre.