The M85 machine gun was well-known by soldiers of my generation, especially tankers who used it in the M60 series tanks.  It was a belt fed, recoil operated heavy machine gun that fired the .50 BMG cartridge.  It was lighter than the M2, weighing 65 pounds. 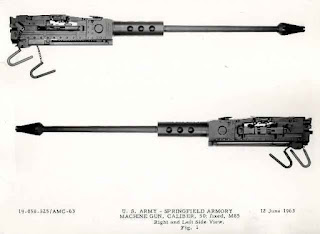 It mounted in the command cupola of the M60 series tanks and was considered the commander's weapon.  It used a push-through belt, unlike the pull-through link belt used by the M2. The gun did not have the familiar butterfly trigger of the M2, but fired either by pulling a handle on a chain, or by a solenoid attached to the elevation handle.

The M85 didn't make the jump to the newer M1.  The Army said that it was unreliable and maintenance-heavy.  Although I never had any issues with the gun.  The ones I used ran fine.  The commander's cupola had an optical sight for the gun, but most of us simply stick our head out of the hatch and watched the tracers

In my opinion, the M85 had two major drawbacks.  First, it used a link system that was not compatible with the M2 ammo system.  Same cartridge, different links, so the crew had to be sure that they were drawing the appropriate ammo from the ammo point.  Second, it was a gun designed to be mounted in a vehicle.  It simply did not have the versatility of the familiar M2 Browning.

The ones I used ran good.  If the tank commander took the time to align the gun  with the optical sight, it was very accurate, but most of us simply watched the tracers.

I looked for a YouTube video of the M85, but can't seem to find one. It was pretty much out of service before YouTube was invented.

I'm with you on the M-85, especially after having dealt with the implementation of the M-2 in the cupola of the M48A2C, a true abortion wherein a beautiful weapon, the M-2, was stuck in a maze where it was hard to adjust and service, and it's ammo supply was limited to 50-round mugs and required the tank commander to expose himself to reload the gun.

The M-85 took a lot of the IQ test out of the fifty-caliber equation - no headspace and timing adjustments to make, a quick-change barrel, shorter receiver meant more room in the cupola, and 250 rounds of ammo before reloading.

This machine gun was long gone even from the Guard when I got in 2003, though as an Armorer I was able to talk to some folks that had hands on. It was reported to once set up fine, to work well but the maintenence issues were at the unit and then direct support level for servicing them. It's hard to do a full break down when you cant test fire it so to speak. Also the parts were not in common as you stated PawPaw, the ammo was unique to this weapon system. Really all told it was a system designed for a single series of tanks and when their time ran out they switched to having either M2s or 240s due to more parts compatability and familarity as well as generally the option to dismount if it came to it. I did find a link for you. https://www.youtube.com/watch?v=QCX39vDax4g Cheers

I guess the Army 'had' to be different. Everybody else stuck with the M2. And a different belt? Who thought 'that' was a good idea???