You've all heard by now of the verdict in the case of Kate Steinle, a young woman murdered in San Francisco by an illegal alien, who just happened to have a gun and shoot her on a pier.

I'm as outraged as everyone else about the verdict, but honestly I"m not surprised.  to think that a jury in SanFran could find an illegal alien guilty of murdering a young white women simply stretches credulity.  What is not in doubt is that the defense was able to plant seeds of doubt in the jury.

As I understand the case, the gun was found to be stolen from a federal agent's car and somehow Zarate came into possession of it.  He was playing with it on the pier and the gun discharged, striking Steinle, killing her.  Zarate was, of course, a prohibited person and in posession of stolen property.  In many jurisdictions, those two offenses predicate to the death of a person would lead to convictions for manslaughter or murder.  Evidently that's no so in California.

All the more reason for me to never go to California.

However, I do take this away from the verdict, however despicable it might be. 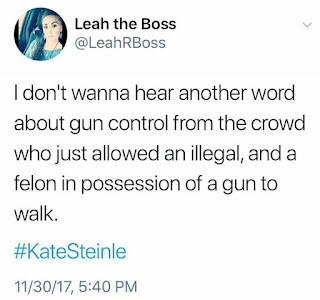 It is going to take them a while to live this down, but Democrats and nutjobs and liberals (but I repeat myself) have no sense of shame.

Email ThisBlogThis!Share to TwitterShare to FacebookShare to Pinterest
Labels: Crime

I was stationed in California for a year, back in the mid-70's. When I left, I made sure that I didn't forget anything, because I wasn't going back for it! I wouldn't live there for a clear title to the whole gorram state, and the sooner it breaks off and falls into the ocean, the better off the whole country will be!

Well, he was convicted on the 'felon in possession' part, but in CA that will only get him between 1-3 years.