I spend time on Facebook keeping up with friends and family.   Every Fast Draw club I know has a Facebook page, where we share events, and  pictures, and swap ideas and techniques.  Facebook is great for that, but it has some weird quirks.   Like this notification I got this morning. 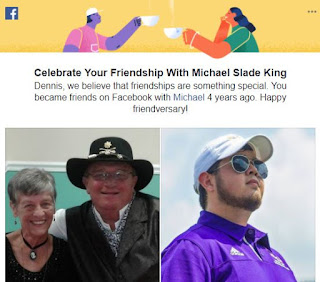 I had to laugh.  Michael is my grandson.  We don't share any blood; he is Belle's grandson, but I met him when he was four years old, and he's been a constant figure in my life since 2001.  Michael's a great kid.  He's a junior in college, making his way in the word, and doing it his way.  He's a musician, and working on a degree in education.   He's currently a drum major in the university band, and his stated goal is to be a band director at the high school level.  He's well on his way to combining music, education, and a career of doing something he loves.

Michael is a great kid, and the idea that I've only known him for five years is laughable.  Michael is one of the reasons that this blog is named PawPaw's House and I am very proud of him.
Posted by Pawpaw at 8:45 AM

Email ThisBlogThis!Share to TwitterShare to FacebookShare to Pinterest
Labels: grandkids

Weren't you the one who told me, several years ago, when my step-daughter's daughter adopted her husbands daughter from his first marriage (thus making me a great-grandfather to someone who is in no way related to me) "Don't get all mixed up with the biology of it. You love the ones they bring you."?

Sounds like you're walking the walk, as well as talking the talk! Good on you!