Belle and I took a couple of the grandids to the Buckeye Christmas parade this afternoon.  A small-town parade, we had the high school marching band, we had horses and old cars and floats and a fire truck. 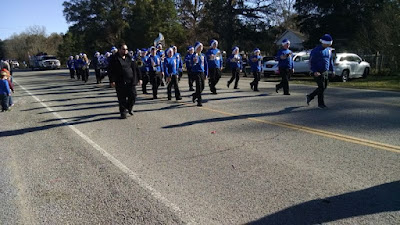 I have a grandson, Zach, in that band somewhere.  He plays the trombone.  I never did get a clear shot at him. 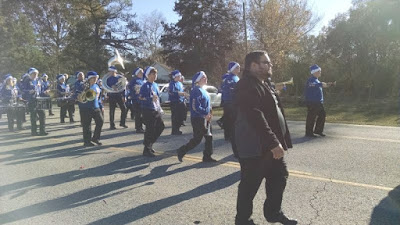 But, the floats were nice, the Shiners had their little go-cart trucks, and the candy thrown to the kids was excessive.  Our youngest, Lucas, managed to score the bigger portion of a Wal-Mart bag full of candy and gee-dunk.  After the parade, we took him to his momma, who was amazed at the amount of tooth-rot he was bringing in the house.  He'll be on a sugar high for a week.

Email ThisBlogThis!Share to TwitterShare to FacebookShare to Pinterest
Labels: Christmas

Love small town Christmas parades. Went on my first "date" at one, took a girl from school (I was 12, she was 13, we were in the same grade, and I had a terrible crush on her!) to the local drive-in burger joint on my little Appaloosa stud horse after the parade. And she actually kissed me, when I got her back to her parent's car!

Don't think my feet touched the ground for a week!

Thanks for the memories!

Yep, always impressive, and it's a chance for the local folks to get out the 'toys' and play with them.

They are a lot of fun aren't they?