It looks like Doug Jones beat Roy Moore in the Alabama Senate race.  It is instructive to look at the results and study the numbers. 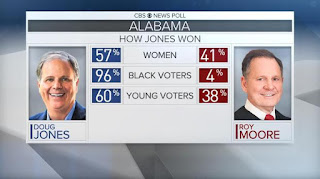 Jones did better with women, black, and young voters.   With all the talk of sex scandals, it's no surprise that Jones bested Moore with women and young voters.  The groping/harassment scandals make a lot of waves in an election and we see this here.  What we also see is that black voters cast ballots almost in a block.  This is nothing new, but if Republicans want to do better in tight races, they've got to reach out to black voters. 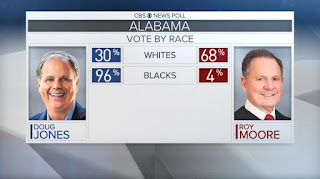 Here we see the vote broken down by race.  It's the same story as the table above, and it tells the tale of who voted in this race.  This reminds me of the last Louisiana governor election.  It came down to the Democrat, John Bel Edwards, and the Republican, David Vitter.  I would not vote for Edwards, as I believed that he was wrong for Louisiana.  I could not vote for Vitter because when elected to the US Senate, he ran on a family values platform and was immediately embroiled in a prostitution scandal.  So, I sat it out.

The Democrat won, and the Democrats chortled over the win, but the fact of the matter was that Vitter was a piss-poor candidate.  Edwards, being the Democrat that he is, is trying to flush the state down the budget hole.  Taxes are up, spending is up, and the state is in a perpetual budget crisis.  Hopefully, the Republicans will field a better candidate next time.

Alabama will get a do-over in six years.  Hopefully, the Republicans will field a better candidate.
Posted by Pawpaw at 10:00 AM

I think the do-over is in two years. I believe the special election was to fill the position vacated by Sessions when he accepted a job with the Trump administration.

Jones will be in for 3 years, minimum. The next regular election for that seat is November, 2020.

Very mixed feelings on this. I think Moore was a horrible candidate, but was a reaction to the national party trying to force a moderate-left candidate on a much more conservative state. So the state voters gave them the finger and went with Moore in the primary, despite him being a problematic candidate. And even then, he would probably have won if not for the October surprise.

Lesson to the national party: don't try to run Dem-lite candidates the base doesn't like.

Lesson to the states: making rude gestures at the national party is fine. But running the nearest thing you could find in negatives to H. Clinton isn't too great an idea either.

Lesson to President Trump: taking solid Republican votes out of the Senate to put in Cabinet positions isn't a great idea either. Taking them out of the House isn't great, either, but there are more of 'em and they can be replaced faster.

I think it is instructive to look at the allegations made against Moore in the local context; here is the only article I have found so far that actually does that:
https://townhall.com/columnists/joyoverbeck/2017/11/20/roy-moore-the-moms-and-the-yearbook-signature-n2411630

I felt the same way in California when I had McCain as the Republican nominee and I had Obama. I couldn't vote for McCain and wouldn't vote for Obama. I sat it out. That was the sucks to be in Cali. By the time the primaries rolled around to us we had just the one choice left since all the others had bowed out by that point.