I was out running errands this morning and stopped by the grocers on the way home.  I didn't even get out o the produce aisle.

I got home, found some sausage and cut it up, dropped it in a hot skillet.  While it was sauteing, I cut up half of an onion and a bell pepper and dropped those in the skillet as well.   Said what-the-hell, cut up some little roma tomatoes, and some summer squash, added them to the skillet, put a lid on it and turned the heat down low.  After about twenty minutes I took the cover off. 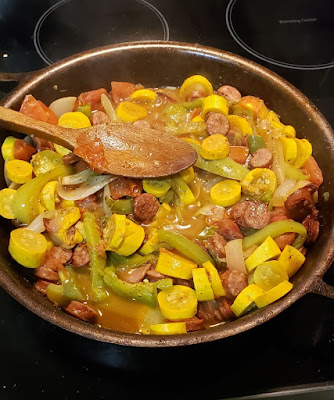