Nearly two years ago, I reviewed a holster from Craft Holsters, made for my 1911.  Recently, Al, at Craft Holsters contacted me, asking if I'd review another of their holsters, the Panther.  I told him I would, and we talked about the handgun.

I'm a revolver fan, having carried one for most of my law enforcement career.  My go-to revolver for serious social work was a Smith and Wesson Model 66.  When I began cop work, the Model 66 was the pre-eminent handgun carried in holsters all over the US.  In the 80s and 90s we switched to semi-autos, but many of us knew the 66 platform ad trusted it.  I personally didn't make the switch to a semi-auto until 2003.  By that time I was a bit of a dinosaur in the cop shop.

When I went into plainclothes I used a basic pancake holster, made by Safariland.  This was in 1981, and that holster has served me well over the years.  Good gear last forever with routine care, and that old holster  is still knocking around.  When Craft Holsters gave me the opportunity, I decided to take it.

The holster came in this week.

It's an open-top pancake holster, much like my old Safariland.  The old holster worked way-back-when and the new holster still works fine. With a proper belt, it keeps the gun tight to your body, out of the way.

I can hear the commenters now.  Don't beat me up.  I'm a fan of pocket pistols and skinny autos.  I've tried a couple of IWB holsters and haven't found anything yet that works as well as a good solid pancake holster.  In those places where deep concealment is an issue, everyone has to do the best they can do.  But, with a little forethought, even a full sized revolver can be mitigated.

Your mileage may vary.  As an old friend told me, "That's why they make red bicycles and blue bicycles.  Some like red, and some like blue."

Yesterday we had a COVID-correct family gathering in the confines of my barn and I wore this rig, concealed by an old corduroy shit, worn loose.  We're a gun friendly family, and I suspect that I was not the only one carrying.  But, during the meal, I asked what everyone thought of my new holster, and the looks I got were perplexed.  So, I removed my shirt and let them see it. 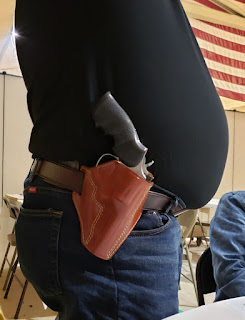 My daughter snapped that photo and asked if I were going to corp my belly out of the photo.  No, I am who I am.  The idea here is that they didn't see the gun until I took my shirt off.  That's concealment.  I'll wear it another day or two before I make up my mid, but here are a few initial thoughts.  1) It does what a good pancake holster does best; keeps the gun tight against the body but ready for immediate use. 2) It's under you arm where it can be protected from a snatch attempt.  and 3) With a little forethought and proper clothing, it can be readily concealed.

It's a new holster for me, and Craft even sent a little break-in kit.  I haven't used it yet, because the leather is supple enough and it fit properly.  It's very comfortable, although I appreciate their sending the kit.  I'm not a leather expert, so I can't tell what weight leather they used, but it seems sufficient to do the job.  It's not nearly as stiff as my competition or duty holsters, but it's not meant to be.  If feels a lot like my old Safariland, which has served perfectly well for almost forty years.

If you are in the market for a new holster, give Craft Holsters a look.  I'm pleased with their offerings.
Posted by Pawpaw at 9:44 AM