So, it seems that a bunch of school kids has filed a suit in the UN to .... i dunno.... make the climate play nice?  It seems rather odd to me.  But, I guess the old truism applies; you can sue anybody for anything.  Good luck with that.

I note, with some reliance on science, that these kids, who hail for 12 countries, got over here to file suit, and I wonder what the combined carbon footprint was of their travels?  If they had stayed home they would have made a bigger contribution.

And, according to Insty, some publication that calls itself The Conversation is trying to diminish conversation.  That's 5-star irony, right there. 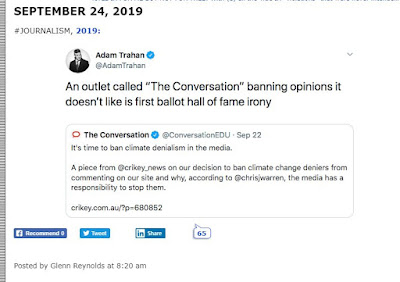 I again note, with some reliance on science, that human beings are carbon emitters, breathing oxygen ad expelling carbon dioxide.  Perhaps these tedious tyrants should just hold their collective breath and see if that makes any difference in the weather.  It would be a start.

In other news, this is officially the second day of Autumn, which doesn't mean a damned thing here in Louisiana.  It's not quite as hot as it was in last week, but it's not nearly time to break out the flannel shirts yet.
Posted by Pawpaw at 9:44 AM

Pandering to children, who are being used by adults. This is called pedoprasty... sigh