David Cicilline is the Dem rep out of Rhode Island.  He does the tweets and shows that he's an idiot. 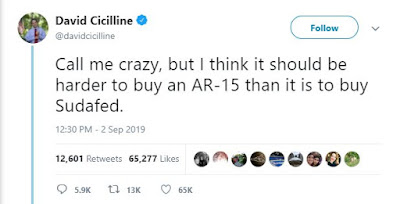 Everybody is calling him crazy.  I haven't been following it, but I understand that the Odessa shooter was a 2nd felony offender, who bought his AR at a private sale.  It's regrettable, but it shows that criminals don't obey gun laws.

And, that David Cicilline wants us to call him crazy.
Posted by Pawpaw at 7:00 PM

If he committed two felonies, how much time did he spend incarcerated?

If incarceration is how we convince anti-social people to rehabilitate, then I want to know how much time he spent in "the slam".

Or did the kind-hearted, progressives who are sure they can love damaged people into perfection let him walk?

The only things I've seen on his criminal record are Evading Arrest or Detention and Criminal Trespass, both in 2002. Since the article says both are Class B misdemeanors, that means the Evading was on foot, not with a vehicle.

I think these were lower in 2002 than they are currently. Right now, Evading is a Class A on foot, Felony-4 in a vehicle, Felony-3 with a previous conviction. The statute was amended in 2011.

But non-DV misdemeanors are not prohibitive.