I was invited to an event today, a Women in Business conference sponsored by the local Chamber of Commerce.  I went and made nice with the conference, talked about my plans as Sheriff.  I was well received, got a few laughs from the audience and maybe a few votes.  It was a good thing.

However, I knew that just a block away was a little downtown pub, Finnegan's Wake.  They were reported to have a pretty good selection of Scotch whisky.  So, I asked Belle to meet me down there for a cocktail after the conference.  After the conference, I walked down to Finnegan's Wake found Belle, ( who had already been served) and asked the barkeep about Scotch.  She poured me a wee dram of something called Bownmore 15. 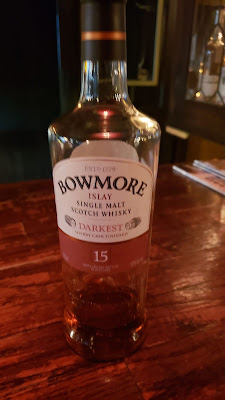 It's a single malt, 15 year old Islay whiskey.  I'm not sure what I was supposed to taste, but the range of flavors that came out of that dram was amazing.  I know my way around a bourbon bottle, but I was not expecting what I found in that little pour of Scotch.  I still don't know if I like it or not, but it was not unpleasant, quite the contrary.  I believe I may have enjoyed it, but it was way outside my wheel-house.

However, talking politics with the patrons, I learned that I was the first candidate for Sheriff that had darkened their door and the patrons were quite welcoming.  I believe I may have picked up more votes at the pub than I did at the conference, which makes it a double-win.  I got some votes, and I started learning about single malt Scotch whisky.
Posted by Pawpaw at 7:45 PM

I have yet to try Bowmore, but Islay Scotches, in general, are more peaty (smokey) than mainland Scotches. I happen to prefer them, but your mileage may vary.

That's a nice little scotch! And good news on the votes! :-)