Early voting started today, and after a monthly gunfight at the club, and after going to a funeral for a family member, Belle and I took the opportunity to participate in democracy.  We voted. 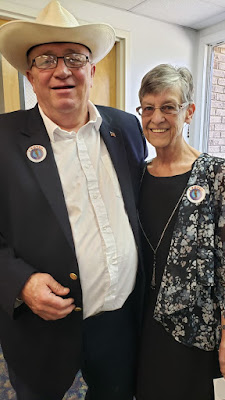 It was the first time I had ever seen my own name on a ballot so I went ahead and voted for myself.  I'll have to check the precinct totals after the primary election to see if Belle voted for me.  She says she did, but she was in the voting booth alone.  Primary election day is October 12th, but early voting is really easy.  The voting commissioner there tells me that they've had a steady stream of people coming through all day long.
Posted by Pawpaw at 4:12 PM

Email ThisBlogThis!Share to TwitterShare to FacebookShare to Pinterest
Labels: elections

Good luck, Sir. Your parish will be lucky if you win.

Your readers, however, will probably lament that you are busy.

Best wishes! If this was Chicago, I'd vote for you from Montana. Likely y'all run a tighter operation than the Windy City though.

Get a picture of the ballot, or if possible after the election, an actual ballot. You may not want it, but I'll bet it's something future generations might like to have.

Best of luck to you, Sir. I'd vote for you in a heartbeat, but since I'm neither Dead nor Democrat, I'm forced to vote in my own precinct and only once.

Appendages crossed for you!