It appears that our President had a very good day, yesterday. 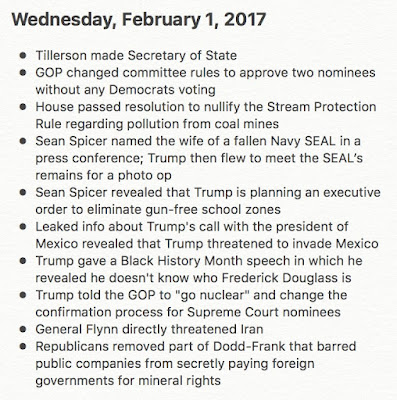 Of course, the Left is outraged.  It appears that Sarah Silverman is calling for a military coup.  Good luck with that.  I doubt that the military wants to get involved.

I do like the idea of Mitch McConnell invoking what I call the "Reid Rule".  If it was good enough for the Democrats in '09, it is certainly good enough for the GOP in '17.  Just line up all of Trumps appointments, and run then though the Senate floor like cattle through a squeeze chute.

Oh, and remind the opposition daily, if they're upset about the expansion of executive pwer, they should have resisted it during the Obama term.  I didn't hear a peep out of them during president "Pen and Phone"s tenure.  What goes around, comes around.
Posted by Pawpaw at 10:00 AM

I abhor one party being able to run whatever they want through the process, but after 8 years of Obama, this does make part of me a little happy.