I've been hering rumblings that the current CFDA World's Record might change hands this year.  The curent world's record was set by Master Gunfighter in the summer of 2015.  He hit a target at 0.295 of a second, but we'll talk more about that in a minute.

A World's Record can only be set at a sanctioned match.  So, it doesn't matter how fast yo go in practice, for a new world's record, it's got to be done at a sanctioned shoot, in front of witnesses.  Having said that, I'm hearing rumblings from practice shoots that some of the fastest are getting faster.  I heard one rumor this weekend that a shooter at an invitational shoot hit a 0.283.  That's blazing fast, and I'm sorry that I can't provide documentation.  MyFacebook skills aren't up to the task.

But, I also saw a Facebook post about a shooter we call Parttime, arguably the fastest gun in Texas.  Here's the picture that accompanied the post. 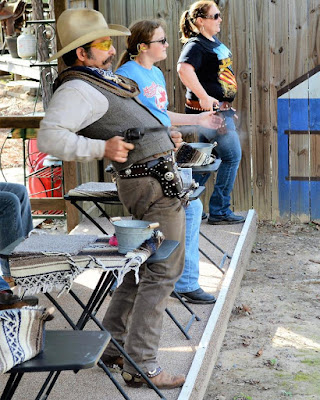 That's smoking fast, and I hope we have video of it.  Speeds of that nature are fast, blinding fast.  We do have video of Master Gunfighter's match where he set the record in 2015, and I'll embed it further down.

Does the record have to be backed up with a time like they do in drag racing and in the same vein will there eventually be a way to tell if the gun moves before the light comes on?