I was working late tonight, and this old warrior comes into the building, trailing a high-school color guard for the regular board meeting.  We greet, as old warriors do, and he hands me a box, tells me that it's a gift.  Then, he goes about organizing the color guard.

The box says Microtech Knives.  Later, after most of the foolishness had subsided, I opened it to look. 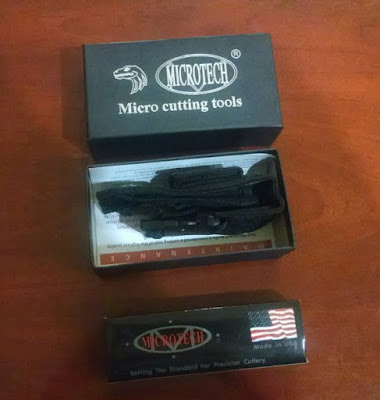 I opened the little box, and sure enough, there's a knife in the box.  I like knives. 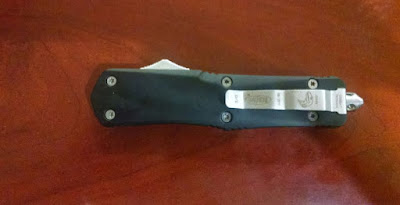 It's heavy, at about six ounces, and it's long, at over five inches closed.  Then, there's that little button on the top, so I pushed it.  Oh, damn, that's just pure evil.

It's a spring knife.  The blade is double-edged, goes to a dagger point, and is four inches long.  Pulling the little knob back retracts the blade.  It's totally one-handed operation.

Thanks, Super Sarge, this is going to be in my pocket for the foreseeable future.
Posted by Pawpaw at 5:00 AM

That's a pretty little sticker.
Shame that it takes having a shield to legally carry one. I've got a little MOD that I bought on a lark, but it's the definition of a Safe Queen.

They repealed the switchblade ban here in Texas, but the double edge still makes that an "illegal knife" when it comes to totin' it around.

My granddaughter once told me "You have awesome friends!" Looks like you do, too. Congratulations!