Fishing in the Pond

PawPaw's house borders a little lake, an old gravel pit that was abandoned and filled with water.  It's dangerous, because of the drop-offs caused by gravel extraction, so we don't swim in it, but it harbors some nice fish.  Lots of people ask to fish in my pond, and I let a couple of trusted friends fish there, but long ago, I adopted a simple rule.

If a kid asks to fish, and acts like he's got half-a-brain, I give him a quick safety talk and turn him loose.  I don't let teenagers who can drive use the pond.  They can fish anywhere, but if a kid comes up afoot, or on a bicycle, he'll likely get permission. Kids who are still mobility limited need places to fish, and I'm not going to deny one the opportunity.  One such kid is John, a neighbor boy who lives down the road.  He has permission to fish and has been casting baits into the pond for a year or so.

This morning, John hollered at me, and I went out to see his latest. 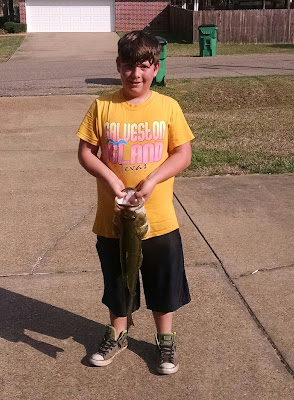 That's a 6 lb, 8 oz largemouth bass, caught on a split-talied crawfish artificial.  We weighed it on my scale, so he could go brag to his dad.    That fish is John's personal best, ad I think it's a fine thing that he was able to get it to shore.
Posted by Pawpaw at 10:23 AM

You are a class act. I agree with your assessment about kids and mobility.

That's not only a nice fish, that's a damn nice gesture on your part. Good neighbors make for a safe neighborhood!

could you take a pic of your pond? I'd like to see the body of water that houses that 'lil leviathon.
leaperman