Sally Kohn is an idiot.  She posted this last week on Twitter, and is being roundly reviled for her lack of knowledge of the Constitution.  (You know, that Constitution that sets the criteria for succession of the presidency. 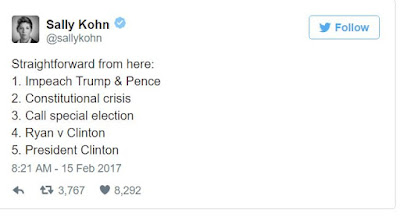 1.  Impeach Trump and Pence on what grounds?  Neither one has committed a high crime or misdemeanor
2.  No constitutional crisis.  Paul Ryan would be president.
3. I just looked at my handy pocket Constitution.  No authority for a special election.
4.  Ryan v. Clinton?  Yeah, maybe after you've impeached Trump and Pence and Ryan is president, but that would be in 2020.
5.  President Clinton?  We've already had one.

I've got a better idea, Sally.  Why don't you stick to what you know.  Music, maybe?  Or just being an idiot.  Or, you could go back to school and study basic civics.  Or, get a pocket Constitution and see what is actually in it.  It might surprise you.
Posted by Pawpaw at 6:34 PM

Email ThisBlogThis!Share to TwitterShare to FacebookShare to Pinterest
Labels: stupidity

I'd even spring for the money to send her one!

NFO, I've already got one. All I need is an address!