This morning, the second grandson and I went to sight in his new rifle.  A Savage Axis in .25-06, he found the rifle under the tree on Christmas.  Today has been the first day that our schedules and weather have coincided enough that we could take the time to make sure that the rifle is shooting where it looks. 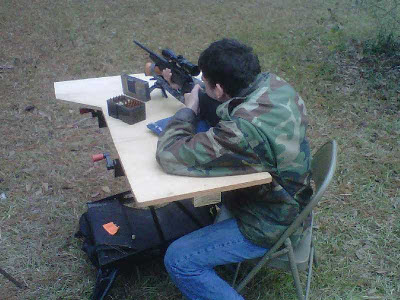 Here, he's hunkered down over the bench, getting used to the new rifle.  It took a dozen shots or so, and we had to change the target center once, but he managed to get it shooting where it looks. 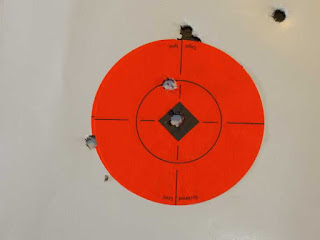 I'd say that's pretty much on target, and he's learning how to use the rifle.  As soon as we finished with the paper targets, he commenced to ringing the gongs downrange.  And, for a $300.00 rifle, I'm impressed with how these little rifles shoot.  If PawPaw hadn't cheaped on the scope, it might be a very good shooter indeed.  For now, the rifle has an old Bushnell on it, but we'll have to look around and see if we can't find something a little better.  But, for now, he's got a rifle that he can shoot.  I am very pleased.
Posted by Pawpaw at 10:55 AM