Eldest and youngest sons came to the house today for Sunday lunch after church, a family tradition. As is also our tradition, the talk turned to guns and we inspected the chromed 1911 I picked up last week. Younger son noticed almost immediately that the gun, with a 1915 serial number, has an arched mainspring housing, and that isn't original nor correct for that period. This observation verifies my belief that this particular handgun is a surplus shooter that has been worked on by several folks over the years. The little gun is a shooter, not a collector piece.

He then announced his intentions to build a set of scales for the pistol and produced a nice piece of red oak he's been saving for such a project. We went out to the bench where he roughed-out the scales. 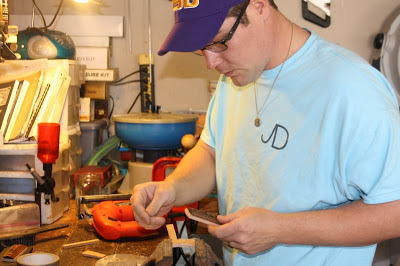 He took the Hogue grips off the pistol to do a rough fitting and we found that someone in the past had engraved the front strap of the pistol.  It looks like the beginning of a checkering job, but the points are very flat.  This front strap design might have been a trademark of a gunsmith in the past, much like the Tiger Tooth design was a trademark of Jim Clark.    But, back to my pistol.  Below is a photo of what we found under the Hogue Grip. 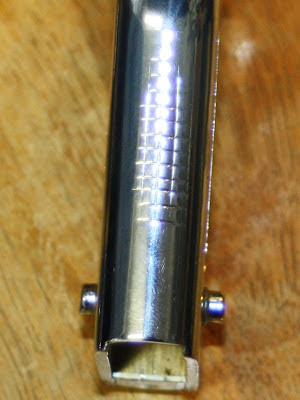 I've never seen a front strap pattern like that and I'd love to know who produced it.  Simply knowing would help me understand the history of this pistol.
Posted by Pawpaw at 4:43 PM

Old type of guns were really awesome. The structure of the guns were like unique. That's why there are more gun owners who collect these kind of guns.