When I bought the chromed 1911 the first thing I noticed was that it sported a trigger shoe. 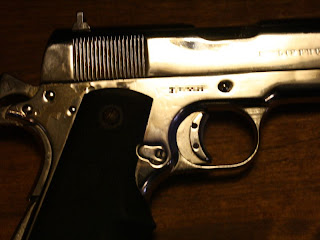 When I got the gun home, after stripping it and doing a function check, I tried to put it in a Serpa holster designed for the 1911.  My Kimber has ridden in that holster for several years.  I was considerably confused when the chromed job didn't fit in the holster, but the Kimber fit nicely.  Then I started looking at the pistol and the holster, and noticed that the Serpa locks on the trigger guard.  I also noticed that the trigger shoe seemed to be preventing the pistol from entering the holster.

So, this morning I went to the bench, found a suitable wrench, and removed the trigger shoe.  Interesting.  The trigger shoe measures 0.516 inches in width, considerably wider than the 0.357 inches that the trigger guard measures. 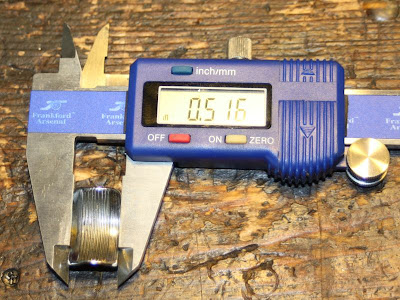 The trigger shoe has now been removed and consigned to the little box of gun-related oddities.

2nd Note**  Rivrdog asks in comments:  PawPaw, does GEN. Patton's remark about pearl also apply to chome-plating on guns?  Heck, dog, I don't know.  I do know that folks still chrome firearms, and the fact that this one was chromed made it less valuable to the gun dealer.  I got it for considerably less than one might expect to find a correct, 1915 era Colt 1911.  It's no longer a historical piece, it's a using gun.  Its provenance may have moved it through the French Quarter.  It may have been chromed by someone who didn't like guns rusting in the very humid Deep South.  I think it's cool, and as soon as this foot heals enough for me to put a shoe on, I'll have this thing at the range to see how it shoots.
Posted by Pawpaw at 10:12 AM

Have you thought about sending that 1911/1915 off to a good chrome shop to have them remove the plating?

Have heard of trigger shoes and have seen pictures, but never actually saw one. Thanks for the measurements. I think I'd have a problem using one because my grip has the trigger finger coming in a a bit of an angle (hey, it's just me and it's comfortable), so it probably wouldn't be a good idea for me even for just target shooting.

Geez, you really did a number on that foot if it's taking this long to heal. Hang in there.

Looks good. Lot of old school guys chromed them for functional reasons as you describe. I've seen a personal piece that a WWI era vet father had chromed and sent his son off to the Pacific with in WWII.

Lotta trap shooters use trigger shoes.
Be a danger on a pistol.