When we bought brisket this week, we found some really nice little (8 lb) trimmed brisket and we thought we'd give them a try.  However, I was worried about the brisket drying out and I went to my local butcher's shop and asked him.  Sausage, of course.  A good, pork sausage, almost an andoille.  So, this morning after rubbing the brisket, I capped it with Guillory's good pork sausage. 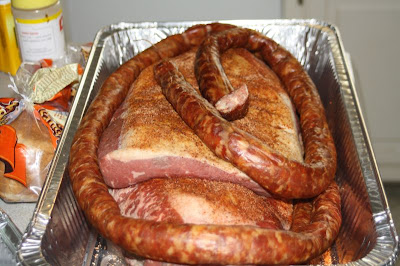 That's about 16 pounds of trimmed brisket and three pounds of good country link sausage.  With some good potatoes, beans, and bread, that should do just fine.  The brisket is in the 300F oven for the next six hours, and when company gets here tonight it should be ready to slice and enjoy.
Posted by Pawpaw at 9:47 AM

Uh, got room for one more? I could be on a plane in no time.

That does look good!!! And they DID trim it a bit close didn't they?

Well, how did it turn out? Inquiring minds want to know....