We woke this morning to one hellacios rainfall, but since I happen to have an indoor range, that didn't affect the shooting at all.  This is exactly why I built the shop.  I may not be able to control the weather, but I can be climate-controlled.

The shooters showed up about 10:00 and we began shooting, the last session of this calendar year. 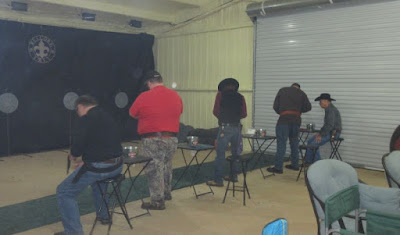 Seven shooters this morning and we shot until folks started drifting away, about noon.

After the shooting was over, I started to get a bit peckish, and decided to cook.  I had a can of bacon-flavored Spam in the pantry and decided to give it a go with some eggs-to-order and toast.  One of the club members snapped a photo o me standing over the griddle, taking egg orders. 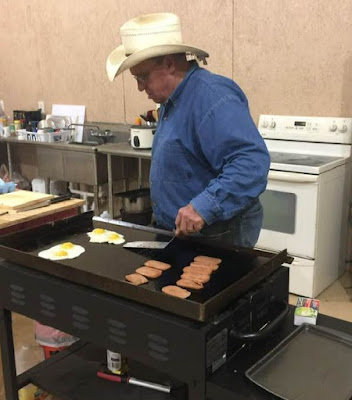 That bacon-flavored Spam wasn't half bad, and since it does't require refrigeration, I'll pick up another couple of cans when I go to the grocers later today.

We're planning to do some big cooking tomorrow.  Belle wants a big gumbo for an office party on Monday, and we'll cook it tomorrow afternoon.  As for myself, I've been jonesing for a white bean chili, and we're going to put that on tonight for lunch tomorrow.
Posted by Pawpaw at 3:17 PM

One of the joys of living in America, instead of ill-annoy. Your own indoor range. I can only dream of that until we retire and move back to the USA.