I've got to brag on the US Postal Service.  When I order something and they tell me it's coming via USPS, I generally groan, but here lately they are stepping up their game.  The last three or four orders have gotten here early.

For example, I ordered some wax bullets from the CFDA.  I got a shipping notice telling me that they'd be here Friday, and when I got home I found them on the doorstep a full day early, on Thursday.  We shoot a lot of wax bullets and when I get down to the last 500, I re-order.  They can put 4000 wax bullets in a medium flat rate box.

If you've ever wondered what 4000 wax bullets looks like, they're bulk packed. 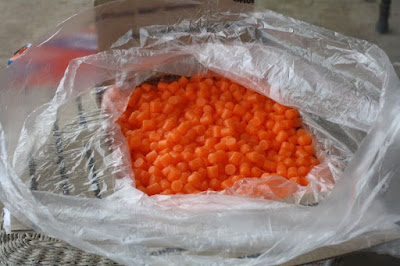 I repack them into zipper storage bags, and I can get 500 into a quart-size bag, which is handy when I'm taking inventory.  The quart bags fit very nicely into the shooting bag, also.

Someone asked earlier this week about The Dawg.  I've been remiss in posting a Sunday Dawg, but he's doing fine.  He's achieved senior status.  He's going a little bit blind, and he's slowing down some, but otherwise he's okay. 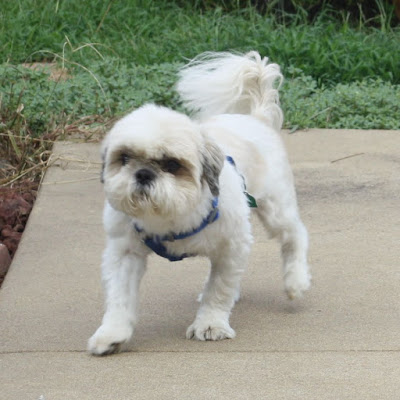 I took that picture this afternoon while he was exploring something on the other side of the pool.

Speaking of livestock, I thought we had lost a cat today.  I saw this pose while I was snapping the Dawg, and thought the cat had died. 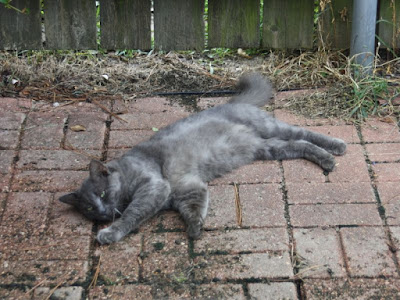 Eyes half-open, distressed pose, I went over an nudged him with my foot.  Asleep.  The cat was simply asleep.  I thought someone had kilt him, and he barely made it over the fence before he expired.  No, just napping.  He's about worthless, although he is a pretty good mouser.  As long as he keeps the mice nervous, he can hang around here.
Posted by Pawpaw at 5:04 PM

Just a quick question. Couldn't you just press the mouth of cases through a block of paraffin to create "wax" bullets?

Cat looks like it's recovering from a fat mouse du jour.

Yeah, Pappy. Wax bullets can be easily made in small quantities, simply by melting wax in a pan, then "stabbing" the case mouth into the cake of wax. I've done that in the past, but nowadays I buy them in bulk. It's a lot easier and more practical.

In 2010, the American Rifleman did an article directly on point.

Thanks for the reply and explanation. Now that I think of it, making 4000 rds the way that I envisioned it could be a hair tedious.

In 1963 I bought a sweet M94 Winchester from my favorite crazy uncle and living in town I had limited opportunities to shoot it. I decided to use paraffin wax which was available dirt cheap and in huge quantities. Didn't work particularly well. So I tried beeswax, just slightly more expensive and didn't work that well either, so I went to a 50/50 mix which worked quite well indeed. I jacked the rear sight as high as it would go and was able to hit a knot hole in the back fence reliably. Then I went to magnum primers and had a pigeon killer and cat accelerator to about 30 yards. beyond that hits were 99.99% luck. I had a lot of cheap fun, the barrel was easy to clean and I rid the back yard of rats, bats and alley cats. Very quietly.

I do the same thing now in an H&R Topper .30-30 using a couple of cases with the primer pockets reamed to a loose fit with shotgun primers.