**I ordered wax bullets this morning.  Four thousand of them.  That's all they can stuff into a medium flat-rate box.  We probably have 600 or so left in stock, but the way we go through these things, that might only last a couple of weeks..  Next paycheck I'll order primers.  This Cowboy Shooting is cheap, but the quantities are amazing.

**Big El-Nino this year, but the weather-weenies aren't sure what that means.


"A big El Nino guarantees nothing," said Mike Halper, deputy director of the National Oceanic Atmospheric Administration's Climate Prediction Center. "At this point there's no cause for rejoicing that El Nino is here to save the day."

Even so, it ought to bring a little more rain, which California desperately needs.


California's state climatologist Michael Anderson noted that only half the time when there have been big El Ninos has there been meaningfully heavy rains.

**Locally, the weather won't be bad this weekend.  Sunday, they're calling for a high of 89F on Sunday 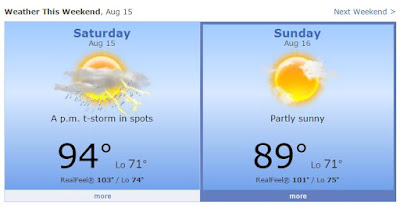 That's a whole lot better than last weekend.  It was a measured 104F in the backyard, and the grease melted off the targets.
Posted by Pawpaw at 3:00 PM