We were in Baton Rouge on Saturday, and I wanted to go to Bass Pro Shops in Denham Springs to look around.  Milady decided to go with me, and we went immediately to the gun room to look at revolvers.

It seems that Traditions firearms (an old name in muzzle loading firearms) has begun marketing a single-action revolver.  It's a Pietta, but it's a good looking Pietta.  Nice bluing, laser engraving, they call it the Liberty model.  Like all our cowboy guns, it's in .45 Colt.  Milady asked the counter guy if she could see it, and when she gripped the gun, she looked at me with surprise.  The grips fit her hand.  The link to the Bass Pro catalog is here.

Milady has small hands, and the grips on a revolver have to be small to accommodate her grip. This one felt good to her.  So, she filled out the forms and this one came home with us. 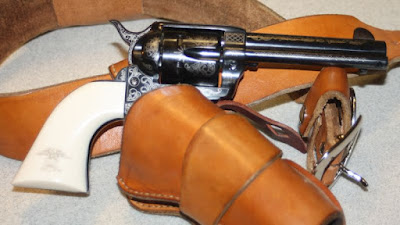 Closer inspection reveals some interesting facts about the gun.  Unlike the original Colt Peacemaker, this one doesn't have a hammer-mounted firing pin.  The firing pin is mounted in the frame and a transfer bar transmits the hammer strike to the firing pin.  The grips are white PVC.  According to the schematic that comes in the instruction manual, it uses a traditional leaf spring to power the hammer.  There is a half-cock notch for loading, but not a safety notch, so the hammer-cocking motion reveals three clicks rather than the four clicks of the traditional Colt action.

Loading is done in the traditional manner.  Put the hammer on half cock, open the loading gate and load the cylinder.  With the transfer bar, it should be perfectly safe to load six, but many of us old-timers will probably continue to load five, in the time-honored tradition.  Load one, skip one, load four.  This traditional method of loading single-action revolvers has worked well for us over the years and many of us see no reason to change.

I don't know the weight of the mainspring, but Milady is able to cock it easily from the holster.  The trigger breaks clean at about five pounds, which is a little stiff, but eminently usable.  This is a brand-new gun, so everything is tight. It might benefit from an action job, but Milady likes it just like it is, so we'll leave it alone for a while.  I detected a little roughness in the hammer, but again, this one is new from the box.  We'll let Milady shoot it like this for a while.  It should smooth considerably with the first hundred firing cycles or so.  If it needs work later, I can always get out the stones, but for the moment, we'll leave it alone.

We left Baton Rouge about five o'clock yesterday and drove home, the little gun in the box.  We had taken it out at the family function we attended and let everyone "ooh and ahh" over it.  We arrived back on our little acre in the waning daylight of dusk, and the first thing Milady did was to grab her holster and head for the wax bullet range.  She got off a couple of cylinders before the light failed, and she declared the gun to be fully operational. 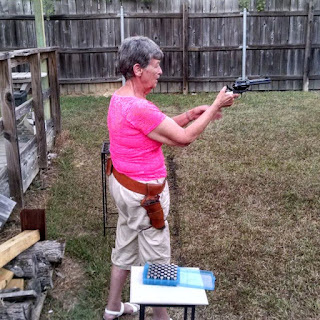 It's a classy revolver, on a basic budget.  MSRP on the revolver is $624.00 and at at Bass Pro we bought it for the mid-500 range.  The laser etching is shallow, but we didn't pay the prince's ransom that a good engraving job would cost these days.  The white PVC grips should be durable, and set off the gun nicely.  The biggest draw on the grips is that they fit Milady's hands.  They're slim and tasteful. The bigger hand-filling grips that work for me don't work for her and when she can pick up a tevolver and tell me that the grips fit her hand I know that I won't be on the bench filing and sanding.  If she likes it, I'm sold.  It's just "blingy" enough that she likes it, it's sized right for her hands, she's able to operate it smoothly, and she claims she likes it.  In fact, she claimed it for her holster.

As I think about it, this makes two new revolvers she's acquired this week.  Maybe next time I'll get to keep one for myself.
Posted by Pawpaw at 6:33 AM

" Maybe next time I'll get to keep one for myself."

Yeah, good luck with that one! I can't bring a .38 Special or .357 Mag in the house anymore without The Boss claiming it!