Coming back through Fort Worth last weekend, Milady wanted to stop at the stockyards and go to a shop she had seen when we were there in April.  Zach, of course, was with us and wanted spurs for his boots.

Zach's other grandad was a rodeo cowboy and had given Zach spurs, but Zach wanted new spurs, and we certainly don't indulge our grandchildren.  So, Zach picked out a pair of spurs, then asked the guy in the shop if he could put larger rowels in the spurs his grandad gave him.  The guy advised against it, because Grandad's spurs are rivited, and taking out the rivet might damage the spur.  Zach agreed, so his grandad's spurs will stay original.

Zach's family has horses, and they ride, so spurs aren't an unreasonable request.  Zach was on horses lonng before he started Fast Draw shooting. 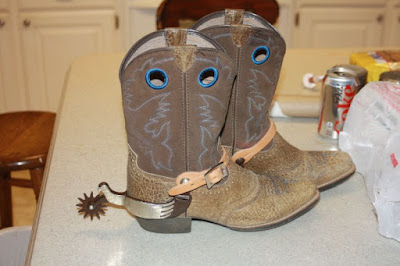 After the club shoot today, a fellow told us that he was selling a holster and asked if anyone would like to buy it.  HE showed it to us.  It's a Mernickle CFD1 REF1, in dark brown, with the gunfighter stitch.  It's been used, not abused and it has that patina that comes from careful use, sun, and sweat.  You can't buy that patina, it must be earned. 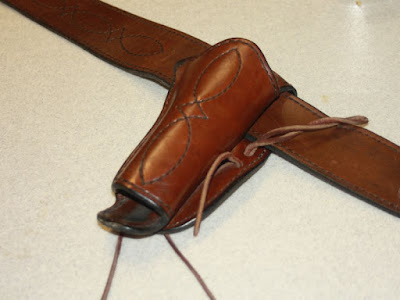 All in all, a very nice fast draw rig, and approved by the CFDA for our style of shooting.  It was a no-brainer.  We won't discuss the price, but it was very, very reasonable.  Mernickle makes nice holsters nd they charge a premium for them.

No, it won't fit me, but it fits Milady, and should fit several of the grandkids.  It's going into the spares bag.
Posted by Pawpaw at 4:25 PM

Grat looking rig and the spurs look good too.

Great looking rig, thanks for sharing the link as I'd forgotten about that particular holster making firm.