Saturday afternoons are club shoot days at the Thorn Valley Shootists Society, my home club.  We're a small club and we were only affiliated earlier this year, but we're growing, one member at a time.

We shoot in a barn at the Lucky 4B Ranch, im Melder, LA.  The owners of the place are very accomodating, letting us use a portion of the barn as an indoor range, which is a huge help in Louisiana.  Normally lately, it rains while we're shooting, as it did today.  We had a pop-up shower fall across us, but except for the sound of the rain on the tin, we never knew about it. 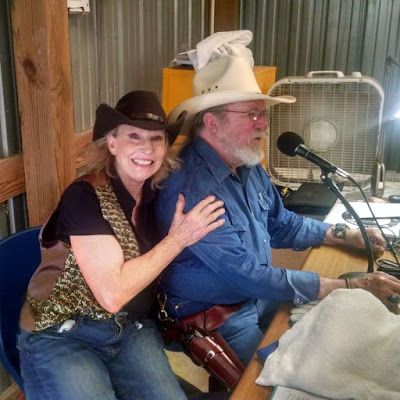 Paula and Art behind the scorer's table.  We take turns "talking", calling times and working the timers. 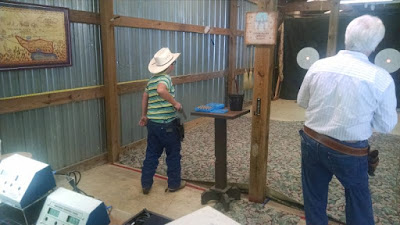 That's Akarate Zach (Zachary King) in lane 1, and Gator (Roland Scallion) in lane 2.  This game is for everyone.  I imagine that 50 years separate Zach and Gator, and they're about even in ability.

Zach is getting better.  He was really consistent in the 8s (that's 8/10ths of a second) and was hitting really well.  Zach met my cousin Denise today.  Denise shoots in the club as well, and when Zach found out she was kin, he had to challenge her to a duel.  Denise said that Zach kept giving her the "stink-eye" when the times didn't go his way.

Some people play golf, or watch sports on Saturday afternoon.  My crew?  We get into gunfights.
Posted by Pawpaw at 6:00 PM

LOL, family gun fights have a DIFFERENT meaning for y'all (Thankfully)... :-)

Art is a great person and a friend. He helped teach my son Chris the value of work and made him a greater man. Thanks Art from Mary and I.