Milady is a revolver gal.  She likes them, prefers them over semi-autos, and has good taste in her personal firearms.  Let's review, shall we. This iconic large-frame Smith and Wesson revolver predates her time with me.  She had it when we met, and I have to admit that the idea of having a girlfriend who owned a 28-2 had a certain appeal to an old gunner like me.  She shoots it occasionally, but she has small hands and the revolver really doesn't fit her.  At 41 ounces, it's heavy, but it will handle any .357 magnum load she can stuff into the cylinder, and if you've got to have one gun, the old Model 28 has a lot to recommend it.  This one is the older model, with the pinned barrel and the recessed cylinder.  it's a very nice example of a 1960-70s era revolver.  I have one ike it, the 6" version. 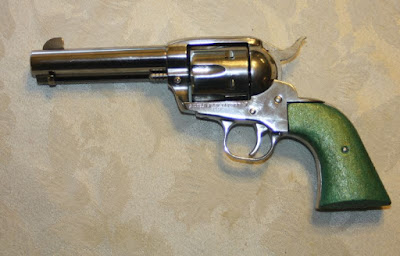 I bought her this one in March, 2015, just five months ago, when we began Cowboy Fast Draw shooting.  In .45 Long Colt, with a 4.62" barrel, it has never fired a single round of standard ammunition.  But, this is the revolver she shoots best, and she's shot thousands of rounds of wax bullet, primer-powered ammo.  This is the revolver that she used to take 1th place overall in the Southern Territorials last month.  The gun came with rosewood grips that were too big for her hand, so she swapped them with a club member for a pair of hard-rubber Ruger Gunfighter grips.  I sanded them down further, to fit her hand and she finished them with fingernail polish and clear-coat.

The only thing I did to the internals of the gun was to clip four coils off the mainspring.  This brought down the tension on the spring from the factory 23 lbs to what we estimate is about 17 lbs.  It's easier for her to operate and is still strong enough to pop the tough shotgun primers that we use in our game.  When she straps to play the Cowboy game, this is the gun she carries.  With the wax bullet loads in  our little corner of suburbia, it is also the gun she grabs when a stray cat climbs the fence.  When Milady loads that revolver late in the evening, it's time for a stray cat to take a hike. 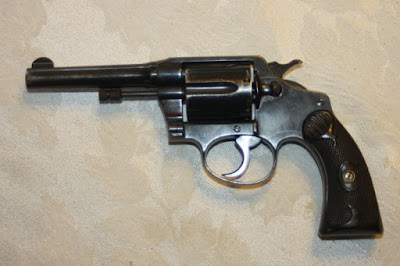 I bought this little revolver this week, to replace another that was stolen from us in April.   The stolen gun was a Colt Pocket Positive, and it's probably the only revolver that she's ever picked up that fit her hand, right out of the box.  The Pocket Positive was in .32 SW Long, and she carried Buffalo Bore defensive ammo in that revolver.  (Yes, Buffalo Bore makes credible self-defense ammo in .32 SW Long)  Milady likes the little Colt D-frames, and she likes .32 caliber handguns.  When I showed her this replacement for her Pocket Positive, she was thrilled.  At 28 ounces with a 4" barrel, it's the lightest of her handguns by a wide margin.  I've ordered ammunition for this revolver and when it arrives, we'll make time to shoot it.  I'm looking forward to learning more about this old cartridge and in my research, I've found that it was a favorite of old-time handgunners like Paco Kelly, Elmer Keith, and Skeeter Skelton.  With a following like that, there must be something to like.

It's hard to judge the relative size of my lady's battery, so I took one snapshot of all three.

Those are my lady's revolvers, and I think that she's well equipped for most handgunning tasks.
Posted by Pawpaw at 9:00 AM

I love that 28-2. In my opinion, a 4 inch .357 is the perfect, do anything gun, and a model 28 is the epitome of class. Sure, a GP-100 can do anything that a 28 can, but the Model 28 is by far the best looking .357 magnum on the market. With some nice walnut stocks on it, that gun would be the ideal. It crosses the boundary of serious working handgun, and work of art.

It is the perfect handgunner's handgun, of a bygone era.

I recommend that you cast about and look for a 3"barrel S&W Model 30 square butt in 32 S&W Long. My mother bought one circa 1970-ish which I inherited. This is an incredible cartridge, accurate, low recoil and in a hand sized gun. https://en.wikipedia.org/wiki/Smith_%26_Wesson_Model_30

I am very fond of my M28.
It looks just like the one shown including the same grips.
Very accurate and businesslike.

The M 28 is a sweet old wheel gun. Revolvers are relatively politician friendly so its only real enemy is rust.

As they say 'Heavy is good, heavy is reliable. If it does not work you can hit the with it.'