Keeping a weather eye on the Atlantic and Caribbean, we find that a disturbance we watched earlier has morphed into a tropical storm.  After Danny came apart, Erika formed east of the Leeward Islands. 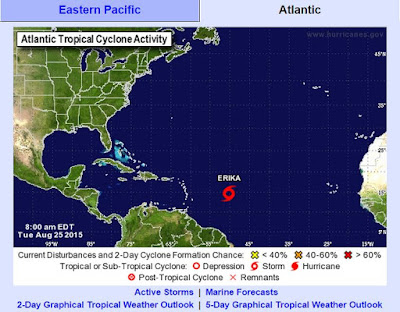 She's the latest in the line, and we hope that she dies early.  However, we're starting to see these things pop up and we best keep an eye on the tropics.  Right now, the storm track is predicting she'll head toward the east coast of Florida, but I've seen these things break predictions.  We'll keep our eye on her.

It looks as if "Crazy Uncle" Joe Biden is considering another run for the White House.  According to CNN, Obama has given Joe his blessing.  We learned yesterday that Biden had confab'd with "Faux Princess" Warren.  It looks like a Biden-Warren ticket might be in the offing.  I"m sure that Hillary will be pissed, but if the investigation goes wrong, (or goes well, depending on your point of view), the least of Hillary's problems will be the presidential race.  She'll do well to stay out of prison.

On the Republican side of the race, it continues to be a clown circus.  We're in the three-ring stage of this circus, and the less said, the better.

Last, but certainly not least, I see in a report from last month that the military is banning fried food:


The Navy Times reported that there will be no more fried chicken, french fries and shrimp. Instead these foods will be baked in “state of the art ovens.”“Whole milk will be replaced by skim and soy; fruits and vegetables will be on prominent display,” the report noted. “The fast line will remain, but its offerings will be cut back.

What the hell is going on in my military?  That's simply heresy!
Posted by Pawpaw at 3:30 PM

Now that our government has come out and admitted that fat and cholesterol isn't bad for you, this is what they do.

Here is a (nuthouse?) analysis of the three ring circus. It has me wondering how true it is.