With the legal basis for the raid on Mar-A-Lago crumbling like a stale cracker, the DOJ knows that the public is turning against them.  SO, they staged a photo of all the kinds of docs that President Trump had stored in a box. 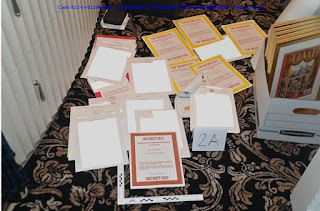 When I saw that photo, I was horrified.  Recalling my training on classified document handling while I was in the Army, I saw that the FBI had hoist themselves on their own petard.  If President Trump had not declassified those documents, and those pages were in fact still classified, taking a photo of them is itself a crime. We don't photograph classified documents.  It's against the law.

I understand that there will be a hearing today to determine a number of things, to include whether a special master will be appointed to oversee these documents.

PJMedia has a full rundown of the DOJs arguments.  It's a doozy.

Admission that these were in fact declassified by 45?

I look at this and the Dept of (In)Justice saying "classified" and I see it with Dr Evil air quotes around the word.